Lucky Street filly Seduce Me let loose with a stunning sprint to win the Amelia Park Maiden (1200m) at Belmont on Wednesday.

She faced an enormous assignment coming off the home turn when last of the main pack and spotting front-runner Halatorion (Oratorio) the best part of ten lengths.  Despite drifting in near the finish, the 3yo filly raced according to plan for trainer Simon Miller. 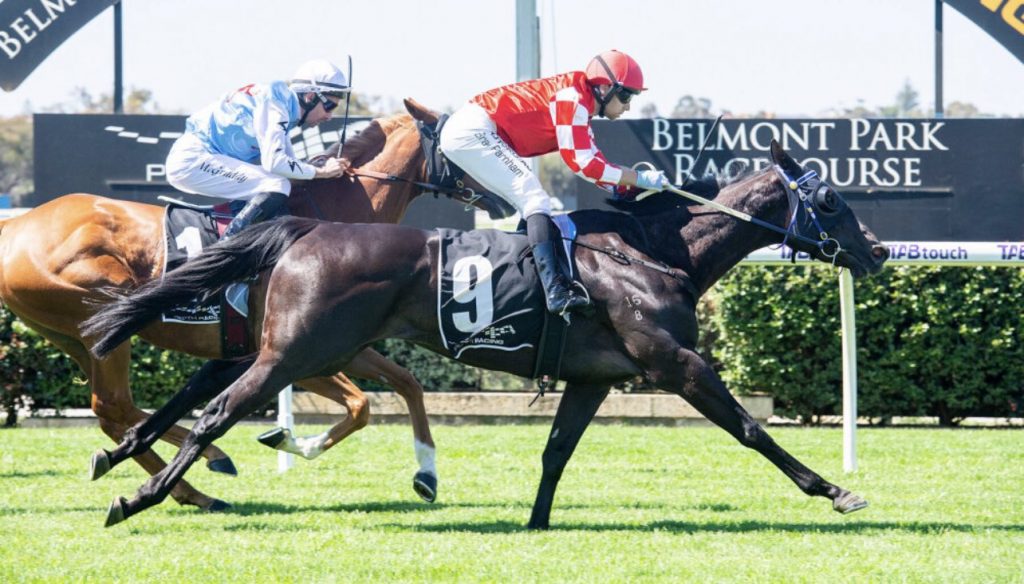 “There looked to be plenty of pace on paper and Brad (Parnham) bided his time,” Miller confirmed.  “I thought she may have left her run a bit too late but she brought her trackwork to the races today.

“She worked like a rocket on Saturday morning.  I was tempted to remove the blinkers but decided to keep them on.  She’s the only Lucky Street in the stable so we’re running at a 100% strike-rate!”

Parnham acknowledged the winner was a fair distance away at the top of the straight.  “I was confident she would reel them in.

“She ran a good race at her first start a fortnight ago but hit the front too soon and got lost.  She just needs to keep learning because the ability is already there.”

Seduce Me (Picture: Western Racepix) is raced by Nathan Jaskola (BFA Racing) and Darling View Thoroughbreds.  Lucky Street has been based at the Mundijong stud since an outstanding career highlighted by a 2yo double in the G2 Karrakatta Plate and RL Magic Millions Classic.

Her dam Naughty Affair (Danehill Express) was a $50,000 buy for Jaskola from the Toreby Park consignment to the 2013 Perth Magic Millions.  She retired unraced and her only other foal has been last season’s Pinjarra 3yo maiden winner Bread To Flirt (Gingerbread Man).

Second-dam O’Flirty (O’Reilly) was a Listed winner of the 2004 Lindsay Rosenthal Stakes and Burgess Queen Stakes.  The NZ-bred mare is a 20-year-old and was retained instead of being catalogued for last year’s Mungrup Stud Dispersal.

Her most recent foal was pin-hooked for $6,500 by Havenbridge Park at that Sale.  The 2yo colt by A Lot (USA) is now with trainer Bruce Watkins after being purchased for $21,000 at this year’s Perth Magic Millions.