An Ascot black-type double on Saturday was a just reward for Chris Parnham who is riding as well as any jockey in Perth.

Flying Missile had been placed at Listed level in the Belgravia Stkes and Burgess Queen Stakes before the breakthrough on Saturday.  She is a homebred for Neville and Carol Parnham from Magnus mare Magnus Missile who has been a favourite of the family since her racing days.

“I learned to ride on Magnus Missile,” Chris recalled after bringing Flying Missile back to scale.  “Mum and Dad own this filly, too, so it’s pretty special.”

Magnus Missile was a $6,000 yearling buy for the Parnhams at the 2012 Adelaide Magic Millions.  She won races at Belmont (3) and Ascot (2) and her only unplaced run was in the 2013 Magic Millions 2YO Classic behind Camporella.

“She injured a pastern and only raced 9 times for us before going to stud,” Neville Parnham said on Monday morning.  “After Flying Missile, she foaled Demolish (Rich Enuff) who flew from last to finish fourth in the Initial Plate (1000m) last month.  He’s been gelded and spelled.

“The mare has a yearling filly by Lean Mean Machine and we’re waiting on a 42-day test to confirm she’s positive to Playing God.”

Parnham prepared Playing God and his daughter Kay Cee to Group 1 triumphs in the Kingston Town Classic.  Kay Cee was retired after an unplaced run in the G1 Railway Stakes on Saturday and she bows out with earnings of $1.27 million.

The Mungrup Stud connection paid off for Chris Parnham with Hot Zed in the LR Carbine Club Stakes.  He’s by Red Hot Choice and carries the familiar brown and white hooped colours of the former Narrikup-based nursery now known as Willaview Park.

Trained by Lou Luciani, Hot Zed got the better of front-runner Son Of A God (Playing God) to prevail by a half-head.  “That was a gutsy win,” Parnham said.  “He toughed it out really well and so did the second horse.”

Hot Zed is a half-brother to a half-dozen winners and is the final foal of Zedfire (Zedrich).  She was bred by Ellie Giles as was her younger sister Penny Banger who won a LR Schweppervescence Sprint at Flemington.

Penny Banger has given the pedigree multiple Group 1 updates in the last twelve months through weight-for-age star Behemoth (All Too Hard). 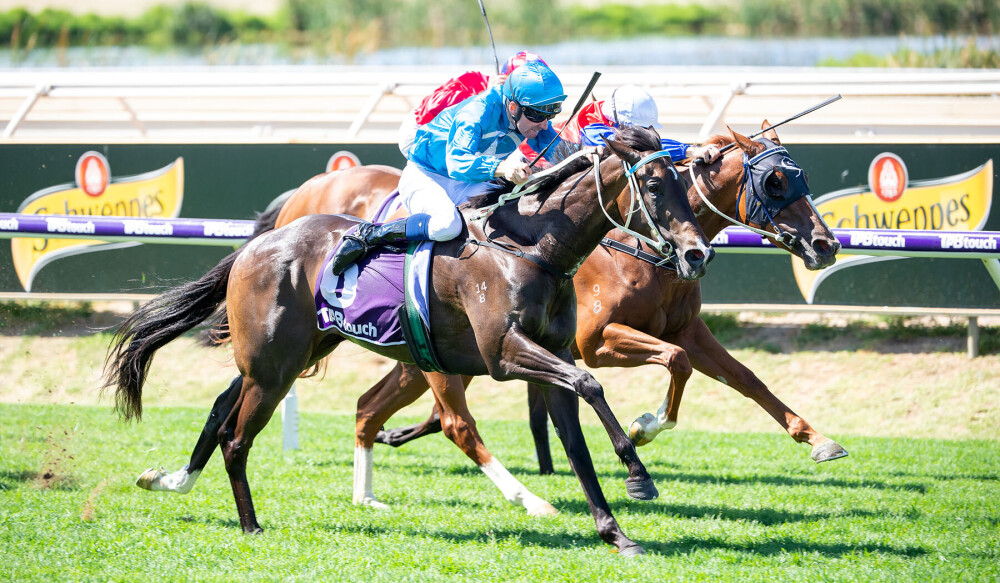