Peters Investments was in its element with four winners at Ascot on Saturday and the icing on the cake was a cavalier victory by Western Empire in the G1 Railway Stakes (1600m).

Western Empire (Iffraaj) positioned fifth in the running line and was poised to strike off speedy sectionals set by Massimo (Sessions).  Shifting into top gear under Willie Pike, he waltzed away in the straight to score by four lengths from Comfort Me (Playing God) and Kissonallforcheeks (Written Tycoon).

“It took us a long time to win our first Railway but we seem to have got the knack of it the last couple of years,” Bob Peters said.  “William and I decided it was best to be a bit closer and not get caught up on the fence.  It’s hard to tell how good he may be.  Going forward, he’s got to meet the opposition worse at the weights but he did it quite well today.” 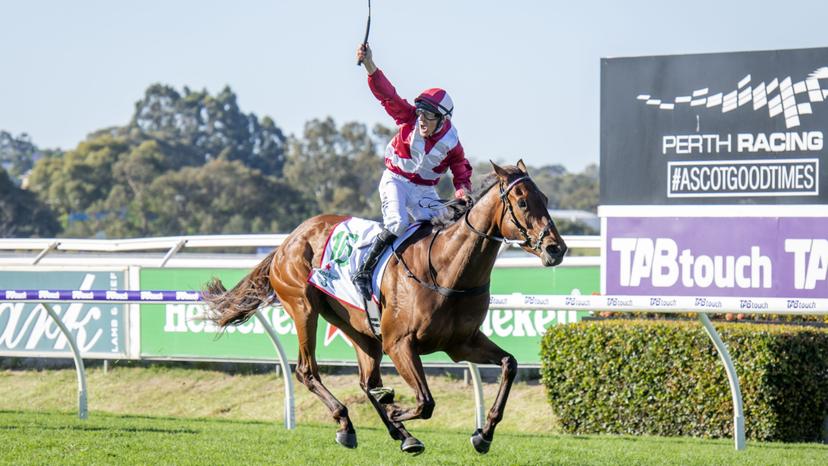 Western Empire (Pix: Western Racepix) was foaled across the Tasman and is from Peters Investments G2 Perth Cup winner Western Jewel (Jeune).  She has another two colts in the pipeline by Iffraaj from his time shuttling to Haunui Farm.

The Railway result improved his 12-start stats to 7 wins and 4 placings for earnings of $1.26 million including Westspeed bonuses of $96,450.

“I knew we had the horse to get the job done,” Pike said.  “The stable’s training them so well.  He used to do it his way but is in the zone now.”

Western Empire, like the majority of Group 1 winners bred by Peters Investments, is by a sire standing outside Western Australia.  TBWA records indicate its most recent Stakes winner by a local stallion was Shining Knight (Blackfriars) in the Group 3 Belmont Sprint in 2015

Nevertheless, in view of Melbourne media mentioning the status of Perth’s Group 1 events following the current ban on interstate horses, no one continues to do more than Bob Peters to keep our summer carnival features safe from being downgraded.

Peters Investments is the benchmark and Western Empire will be the next homebred to use Ascot as a springboard to Melbourne or Sydney.  He will hardly be breaking new ground with recent Group 1 raiders the calibre of Arcadia Queen (MRC Caulfield Stakes & VRC Mackinnon Stakes), Celebrity Queen (MRC Oakleigh Plate), Superstorm (VRC Mackinnon Stakes) plus Regal Power (MRC $5million All-Star Mile).

The level of that success was articulated by ANZ Bloodstock on Sunday morning.  “The cerise and white colours, for many interstate, have become synonymous with Perth racing.  Given the imperious nature of Western Empire’s victory, it is difficult to see how any rival could have made inroads on the horse that was sent out the shortest-priced favourite in the race’s 134-year history.”