Lark Hill trainer Darren McAuliffe experienced a roller-coaster of emotions on Wednesday as The Velvet Queen powered to victory in the TABtouch Better Your Bet Maiden (1200m).

Handled patiently by Chris Parnham, the 3yo chestnut filly came from last to lead home a quinella for Scenic Lodge stallion Universal Ruler at Belmont.  Starting an odds-on favourite, she split horses in the straight to defeat Uni Queen by half-length. 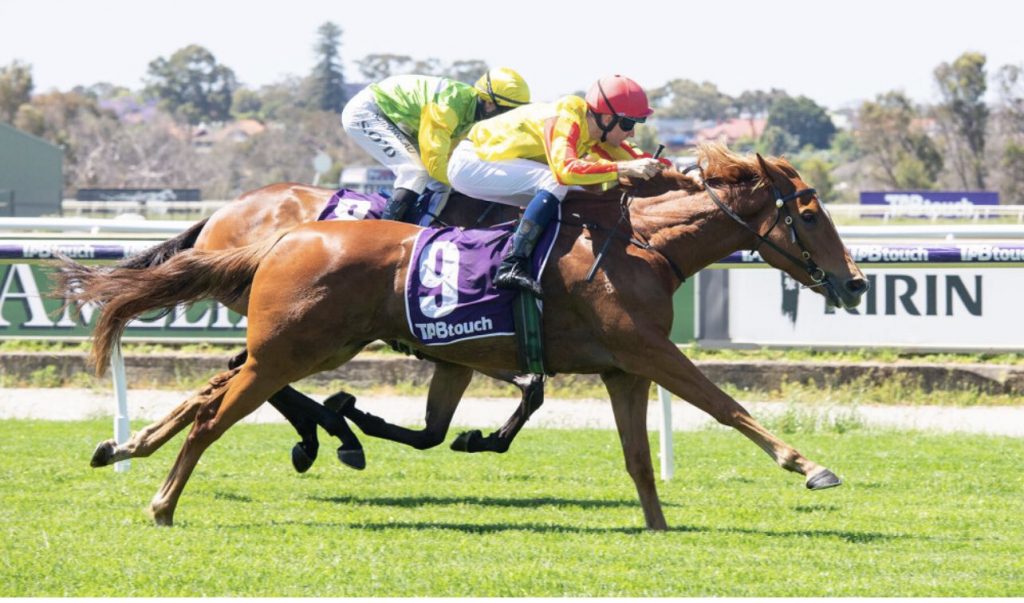 At her only other start, she had been placed in a strong maiden behind It’sarayday and The Front Bar at Belmont in July.

The Velvet Queen (Picture: Western Racepix) is a younger sister of McAuliffe’s favourite horse The Velvet King who was retired on the weekend.  The $900,000 earner signed off after an unplaced run in the G1 Railway Stakes.

“They’re similar types and this one has a devastating turn of foot,” D-Mac said.  “She’s a very talented filly with a future.  She settles and I can see her getting out to 2000m.”

McAuliffe also mentioned he was happy the jockey didn’t get stuck in traffic.  “I was in two minds at the 500m,” Parnham admitted.  “I didn’t really want to go around them so we cut the corner and found a passage in the straight.  She gives me a nice feel and will be winning in better company than today’s race.”

The Velvet Queen is the final foal from Doubleblack Velvet (Show A Heart).  The dam was purchased for $7,500 by Impressive Racing’s Kevin Berry at the 2013 Magic Millions National Broodmare Sale and apart from The Velvet King, also delivered the winners Favulous Floyd (Falvelon), Velago (Delago Deluxe) and Velvet Room (My Admiration).

The Velvet Queen is the 124th individual winner by Universal Ruler who has built a winners-to-runners strike-rate of 61% at Scenic Lodge.