Flicka’s Chance has been an excellent advertisement for Ibbotson’s Encosta de Lago sire My Admiration but the Pinjarra studmaster would have been just as excited when his Perth Magic Millions graduate Sparkling Blue was successful earlier in the day at Ascot.

Sparkling Blue (Foxwedge) was resuming in the Get Vaccinated Cup (1100m) following a debut win at Belmont in August.  The 3yo filly powered home to overhaul Astrape (Snitzel) by three-quarters of a length in what was a bitter-sweet victory for owner Geoff Bull and trainer Adam Durrant.

“We were going to target the (LR) Burgess Queen and (G3) Champion Fillies but a paddock accident meant we had to wind back our ambitions,” Durrant told the West Australian Newspaper.  “It’s a bit disappointing because I thought she would measure up in those races.”

“We’ve always had a big opinion of her but she’s still immature so we’re not in any rush.”

Ibbotson purchased her dam Special Jewel for $26,000 from Peters Investments at the 2016 Perth Magic Millions Winter Sale.  She was positive to Widden Stud sire Deep Field and that foal sold for $57,500 at the 2018 Perth Magic Millions.  Named McKeever, he won on debut at Bendigo in April for Warrnambool trainer Symon Wilde.

Sparkling Blue made $70,000 at the 2020 Perth Magic Millions and Durrant went back and bought her My Admiration half-brother for $30,000 at the Swan Valley in February. 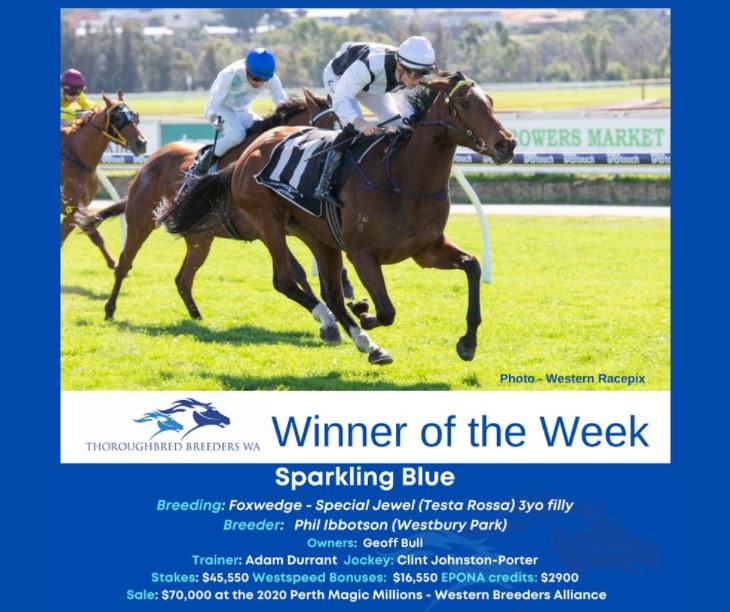