Peters Investments homebred Superstorm could land an elite double in the G1 Mackinnon Stakes (2000m) at Flemington this Saturday if he continues to please trainer Danny O’Brien.

Superstorm snatched a last-stride victory in the G1 Cantala Stakes (1600m) last Saturday to give Damien Oliver the honour of riding more Group 1 winners than any other jockey in the history of the Melbourne Cup carnival.

“He seems to have come through the run really well,” O’Brien said on Monday.  “We really like the horse at Flemington.  It’s the best track for him.  He hasn’t won out to 2000 metres but this is the ideal time to give him another chance after a seven-day break.”

Superstorm (Sebring) was bred by Bob & Sandra Peters and is one of four Stakes winners from Group 3 winner Stormy Nova (Metal Storm).  “Bob tossed up before deciding against the Cox Plate because he was keen to see him at Flemington,” O’Brien revealed.  “A high-pressure mile probably suits him best.  He won the Feehan and was placed in the Underwood and Toorak, so it’s great to knock off a big one.

“And Damien’s ride was as good as you will ever see.  He’s a freak.”

Bob & Sandra Peters sit on a pedestal as arguably the most successful private-enterprise breeders based in Australia.  And despite enduring more than their fair share of setbacks in recent times with breakdowns and a multiple-fatality float accident, there’s always another young one being groomed for stardom at Yalebra Stud in Keysbrook.

Western Empire is the latest cerise and white colour-bearer with a future in the Eastern States.

He won the G2 WATC Derby (2400m) in April and resumed to claim the G3 Asian Beau Stakes (1400m) in a canter at Ascot on Saturday.  He joined in at the furlong and cruised home for a fifth win in a row under Willie Pike.

Western Empire is a pronounced $3 favourite for the G1 Railway Stakes (1600m) on November 20.  “He’s been a work in progress for a long time and used to get caught up in his races,” Peters told the Western Australian Newspaper.   “But he’s grown up and settled well today.”

Western Empire (Iffraaj) was foaled in New Zealand and is from Peters Investments G2 Perth Cup winner Western Jewel (Jeune).  She has another two colts in the pipeline by Iffraaj from his time shuttling to Haunui Farm. 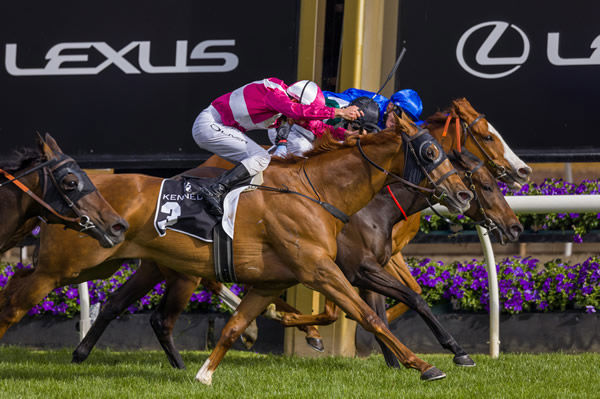