Trevern has been in tremendous form this season and he was not for catching in the TABtouch Masters Hcp (1000m) at Belmont on Wednesday.

The Snippetson sprinter (Photo: Western Racepix) has won three times in four starts this prep and would be perfect but for a last-stride loss on Melbourne Cup day at Ascot.  He jumped to a clear lead for jockey Kesh Dhurun and that’s the last they saw of the short-priced favourite. 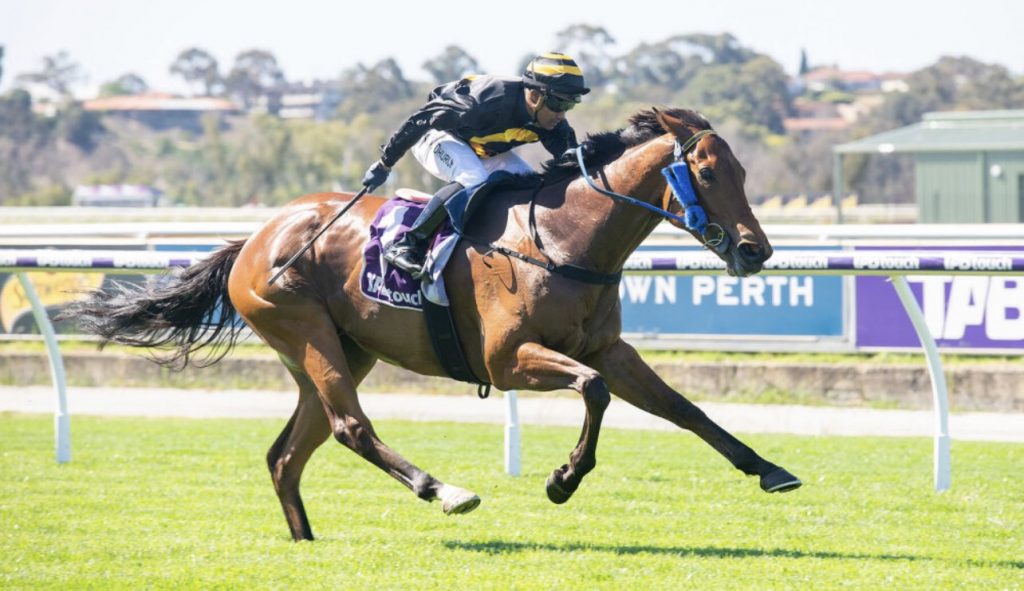 Trainer Jim Taylor picked the right race at the midweek meeting after bumping into promising galloper Mercanto (NZ) last time out.  “We’re used to dodging the cerise and white but now we’re running into the Gangemis and Dan Morton,” Taylor said.  “Between them, they’re winning everything.

“Kesh let him bowl along and it was a good ride.  He usually wobbles around the corner but came around the bend beautifully today.”

Trevern is a homebred for Vern Orr and is a half-brother to the winners Gifted Warrior (War Chant), Luke’s Gold (Fath) and Who’s To Blame (Bletchley Park).

Their dam I’m Gifted (Blackfriars) has a perfect record at stud and her latest foal is a 2yo filly by My Admiration with Williams-based breeder Murray Cowcher.

Snippetson can sustain the winning run with Sniparoochy (R1) and That’s Funny Az (R2) when the Winterbottom Stakes meeting kicks off on Saturday.  River Beau is one of the outsiders in the Winterbottom (R8) but he did make up considerable ground after being held up in the G3 Colonel Reeves a fortnight ago at Ascot.

Based at Scenic Lodge in Muchea, Snippetson is one of the most prolific winner-getters in WA.  There have been 485 individual winners of 1,542 races to date at a soaring strike-rate of 67%.