Saturday’s Ascot meeting may have been dominated by Peters Investments but fellow Westspeed breeders combined to win five other events on the 10-race card that launched this year’s TABtouch Masters.

Man Crush (Manhattan Rain) was the first to salute in the $80,000 Magic Millions Crystal Slipper Stakes (1000m).  He was bred and sold by Patrizi (Misty Valley Thoroughbreds) for $45,000 at the 2021 Perth Magic Millions.

The Luke Fernie-trained 2yo colt sat outside Revitup (Demerit) but couldn’t go with the leader when she accelerated at the top of the straight.  He knuckled down to the task under Clint Johnston-Porter and nailed the race in a pleasing performance going forward.

“He’s a nice horse for the future and I told the owners he could win today because the barrier beat him first-up,” Fernie said.  “He’s just like a kids pony at home and is always poking his head out for a carrot or a cuddle.”

Man Crush is the first foal from Crushed (All Too Hard) who sold to leading Victorian breeder David Moodie for $190,000 at the 2016 Inglis Melbourne Premier Yearling Sale.  She retired a maiden but there was black-type back-up as a daughter of New Zealand Group 1 winner Juice (Bertolini).  Patrizi bred Crushed back to Alwyn Park sire Maschino last year.

Proconsent (Proart) has been a consistent customer in Balmoral Park’s light blue and white-checked colours and he broke through $200,000 in prizemoney winning the TABtouch Better Your Bet Hcp (1600m).

Balmoral Park owner Neil Irvine took him home to Bedfordale after bidding stopped shy of a $30,000 reserve at the 2017 Perth Magic Millions.  That decision continued to pay dividends when Willie Pike speared through a gap and sent him clear to the delight of favourite punters.

“I thought we would be running for second when Big Screen shot away but he was strong hunting down the leader,” trainer Adam Durrant admitted.  “His last two runs have been super now that he’s getting over a longer distance.

“I trained his sire Proart and this bloke could be his best horse.  He was a very, very good sprinter and has been a good bread-and-butter stallion for Neil.”

Proconsent’s pay-day will seem like small change if Balmoral homebred Triple Missile (Smart Missile) wins the $1million Winterbottom Stakes (1200m).  He’s being kept safe at $14 by TABtouch for the Group 1 sprint next Saturday.

Win, lose or draw, Triple Missile is destined for Lindsey Smith’s Victorian stable after the summer carnival.  The lightly-raced 4yo signalled a move east when he charged home from last to be beaten a neck by Wilchino at Ascot last month.   “I think I’ve only had one break 33s for the final 600m and that was Old Comrade!” Smith said.  “Hopefully, he can live up to that.”

His USA-bred dam Triple Latte (Medaglia d’Oro) had been sourced in NSW by agent John Chalmers on behalf of Irvine when she was carrying Triple Missile.  Second dam Miss Mary (Southern Halo) was a Group 2 winner in Argentina and her full-sister Miss Linda won the G1 Spinster Stakes at Keeneland.

La Farola signed off Saturday with a blow-out result for quaddie punters when racing first-up in the Drummond Golf Hcp (1200m).  The Deep Field mare let down with an explosive burst to defeat even-money favourite God Has Chosen (Playing God).

“She had a stone bruise so we took it easy and set her for the Fillies and Mares Series,” trainer Michael Lane said.  “She’s a lazy worker and I though she might be underdone.  But she’s a class mare and now we will go to the (LR) Jungle Dawn Classic.”

Amelia Park’s silks were back in the enclosure at Belmont Park on Sunday when Disengo (Toronado) won the Cool Ridge Maiden (1650m).  She is trained by Adam Durrant and her dam Harada Queen (Haradasun) is closely related to La Farola. 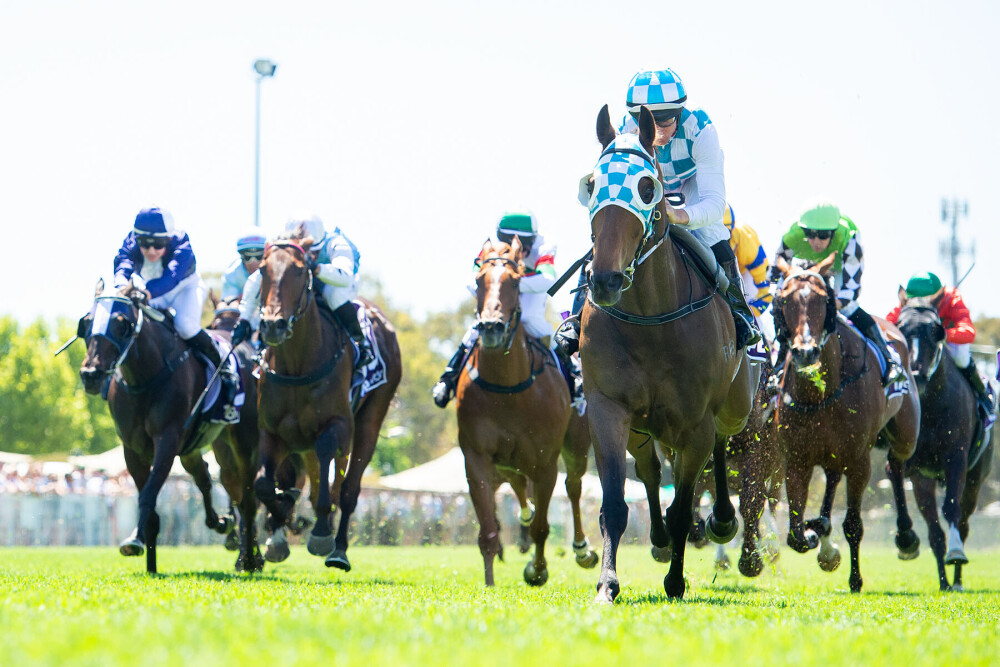