Street Parade looked the real deal when landing the first leg of a treble for Darling View Thoroughbreds at Ascot on Saturday.

The Lucky Street debutant won the Magic Millions Plate (1100m) by a half-length although the margin would have been more but for crowding runner-up Snowdome (Rommel) in the final stages.  He banked $81,300 boosted by a Westspeed bonus of $40,700 for a syndicate managed by trainer Russell Stewart’s wife Antonella.

Street Parade is the first starter from the second crop by Darling View stallion Lucky Street (Oratorio).  The Mundijong stud followed up with two more winners at the Lee-Steere Stakes meeting – The Lady Is A Vamp (I’m All the Talk) and Comfort Me (Playing God).

“I decided to take a gamble on him at the yearling sale,” Stewart said.  “He’s a chilled out character but he went bang the first morning I gave him a squeeze at trackwork.  I went back home and told my wife this one goes alright.

“I will give him a break now and come back for the Magic Millions Classic in February.”

Lucky Street won the Magic Millions Classic and kept progressing to claim the G2 Karrakatta Plate for WA 2YO Horse of Year honours in 2015.

Winning jockey Shaun O’Donnell will been keen to stay aboard when Street Parade returns in the New Year.  “He’s green and is still learning but I think he will make the grade.  I had to pull him off Snowdome who’s no slouch but we picked him up pretty quickly.”

Street Parade (2g Lucky Street – Foo Foo The Snoo by Starcraft) cost $40,000 out of the Western Breeders Alliance draft in the Swan Valley.  His dam was raced by Geisel Park owner Eddie Rigg and, coincidentally, she opened Starcraft’s second crop account on debut at Ascot in January 2011.

Foo Foo The Snoo foaled a filly by Playing God in August. 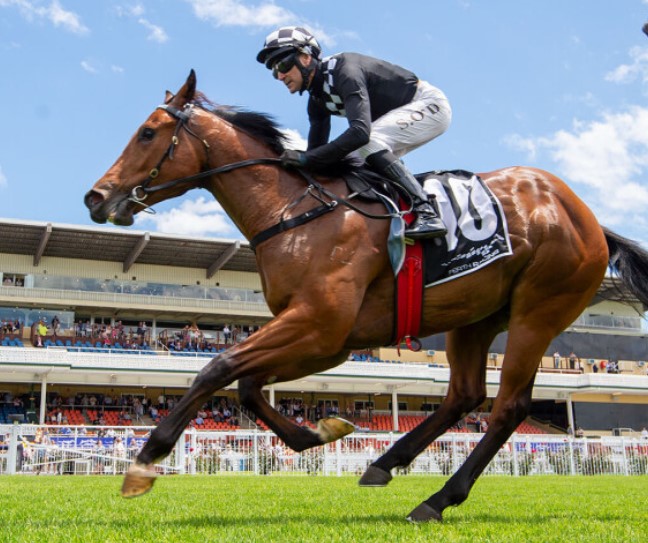