Gold record for Elvis in Melbourne

Looks Like Elvis picked a good day to break a frustrating run of outs when he landed the $175,000 Gold Bullion (1400m) in Melbourne on Saturday.

The consistent son of All American was the class runner of the field and gave Brett Prebble an armchair ride to score by more than two lengths at the stand-alone Pakenham meeting.  The winning prizemoney sent him to third on the all-time All American earner list ($858,560) behind the Geisel Park sire’s Group 1 winners Yankee Rose and Dark Dream.

“I really enjoyed that,” Prebble said.  “He’s a lovely horse and has been running in pretty good races against some really smart horses in Sydney.  He hasn’t been on a Good 3 for a long time either and loved it today.  He just put them away when I let him down.” 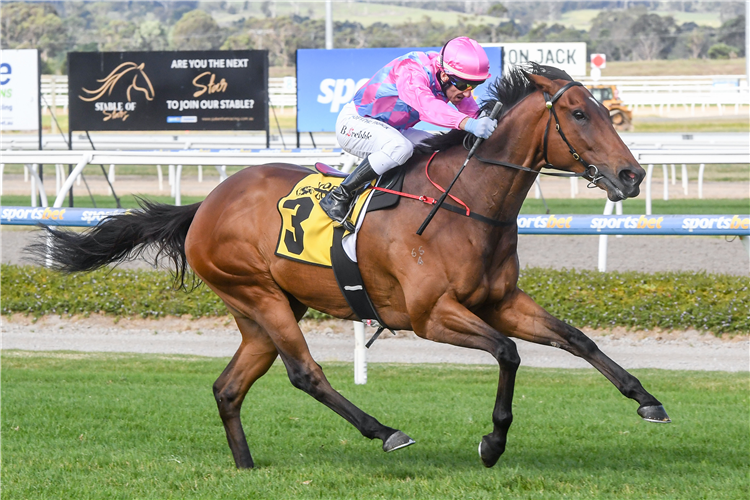 Warwick Farm trainer Jarrod Austin will be tempted to keep Looks Like Elvis (pictured) in Melbourne for the LR Chester Manifold Stakes (1400m) at Flemington on January 8.

The Gold Bullion was his first run since finishing third in the LR Ladies Day Cup (1600m) at Hawkesbury on November 4.  “He got balloted out of The Gong a couple of weeks ago and then the Heavy 10 at Rosehill last week wasn’t to our liking,” Austin revealed.  “If we had run in The Gong, we were going to come down to this race anyway, so we’ve always had it pencilled in.

“Those missed opportunities were a blessing in disguise.  He’s a horse that likes to run fresh so it worked to our advantage.  He had been ticking over nicely and his work had been super.

“He’s much better on top of the ground and got cover.  Then his good turn of foot made all the difference in the straight.”

All American sired Looks Like Elvis from NZ-bred mare Savalook (Savabeel) and that cross has also produced Doomben winning mare American Diva.  He was bred by Mark Casey and Doug McLennan and was knocked down for $110,000 at the 2016 Inglis Classic yearling sale.

Dark Dream looked likely to complete a feature double for All American when he levelled up to Starcaster (GB) in the Werribee Cup on Sunday.  Jockey Luke Nolen was sure he had scored but the judge declared otherwise in a finish that also fooled winning hoop Linda Meech.

“I was a bit depressed after the race,” she admitted.  “I asked Luke if he won and he said ‘Yes’.  I had my head down on the line and was hoping more than anything else,”

It was a pleasing return to form for the G1 Queensland Derby winner who was sold to race in Hong Kong before being repatriated to Australia earlier this season.  He was also a close second in the Moe Cup in October and is knocking on the door for Lindsay Park trainers Ben and JD Hayes.

Geisel Park has entered an All American full-brother to Dark Dream for the 2022 Perth Magic Millions yearling sale and he’s described as a ‘absolute ripper colt’ by stud manager Conor Dunlop.