Hour of power for Darling View

The Darling View Thoroughbreds team kept an eye on the clock for the Sydney and Perth races on Wednesday.

In just a tick over an hour at Warwick Farm, its resident stallion I’m All The Talk sired Race 5 winner Hollywood Gossip and Race 6 runner-up Walkin’talkin’.  The Mundijong nursery then completed a successful day in Race 7 with its 2019 Inglis Classic Sale graduate Titanium Power. 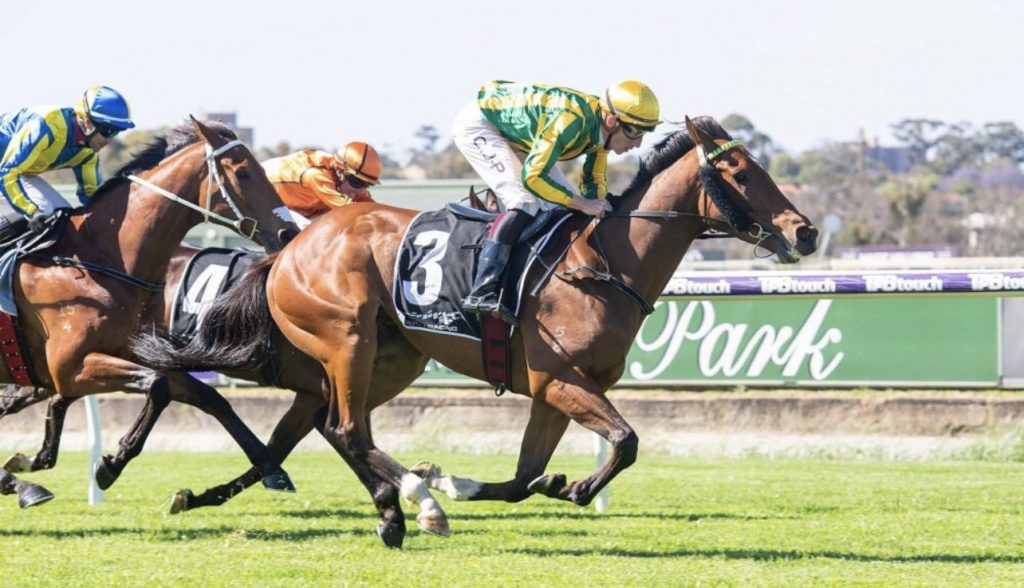 An hour later, Darling View-owned mare Lucky You (Canny Lad) was in the frame when her son He’s A Lucky Lad (Photo: Western Racepix) gave punters some anxious moments before saluting as an odds-favourite at Belmont.

I’m All The Talk (Stratum) was prepared by Gary Portelli and the Warwick Farm trainer struck again with Hollywood Gossip in the Harry Angel @ Darley Hcp (1100m).  The 3yo filly tracked runaway leader Tillotson and, despite being left in front a long way out, kept lifting to defeat Symo’s Girl (Star Witness).

“After a close second a couple of weeks ago, Hollywood Gossip got her first metro win at Warwick Farm.  A great result for all her owners and a special result for the stable with the filly by our former sprinter I’m All The Talk.”

Hollywood Gossip was a $75,000 buy for Portelli at the 2020 Perth Magic Millions and she is a younger half-sister to Dueton (LR Scenic Blast Stakes).  Their 2yo half-brother California Rising (Playing God) is with Neville Parnham and there’s also a yearling half-sister by A Lot (USA) with breeder Jessica Carbery.

Walkin’talkin’ is also trained by Portelli and he put in a promising first-up effort when second to front-runner Rule Of Law.  A Wyong maiden during an initial winter prep, he’s bred to improve being a son of flying mare Scuffs (Speed Week) who won a LR Summer Scorcher at Ascot.

Titanium Power (So You Think) led from a wide gate under 60kg in the TAB Hcp (1300m) and responded under Rory Hutchins after being under siege at the furlong.  It followed a double at Hawkesbury last season.

Darling View director Clive Atwell bred and sold him for $50,000 to trainer Joe Pride through the Attunga Stud draft to the 2019 Inglis Classic Sale.  His dam Dalkeith (Encosta de Lago) had relocated to WA after being purchased by Atwell for $60,000 from Coolmore Stud at the 2014 Magic Millions National Mare Sale.

He’s A Lucky Lad (My Admiration) boosted his strike-rate to 3 wins over 6 starts in the Morley Growers Market Hcp (1650m).  “He’s a talented 3yo and proved too classy coming out of the WA Guineas,” trainer Adam Durrant noted.  “He balanced up in the straight then overpowered them in the last 100m.  And he carried 59kg against older gallopers which made it all the more impressive.”

His dam Lucky You (Canny Lad) retired unraced for Rosehill trainer Allan Denham and she had already foaled winners for Geisel Park (Aquaintance by War Chant) and Darling View (Belle Of Liberty by Patronize).  He’s A Lucky Lad was bred and sold by Westbury Park’s Phil Ibbotson for $65,000 through the WBA consignment to the 2020 Perth Magic Millions.

Lucky You’s unnamed 2yo filly by Lucky Street was bred by Darling View and sold through the WBA consignment for $25,000 to Rhys Radford at the 2021 Perth Magic Millions.  The mare has a yearling filly by Patronize.