As the day progressed, Darling View asserted its sire-power with Hear Me Sing (I’m All The Talk) and Bruce Almighty (Playing God).

Sunny Honey (2c Patronize – Sunsilkin by Oratorio) started at $20 on debut and got home by a head in the Magic Millions Plate (1000m).  He’s the fourth winner from Sunsilkin and her latest foal is a yearling colt by Patronize. 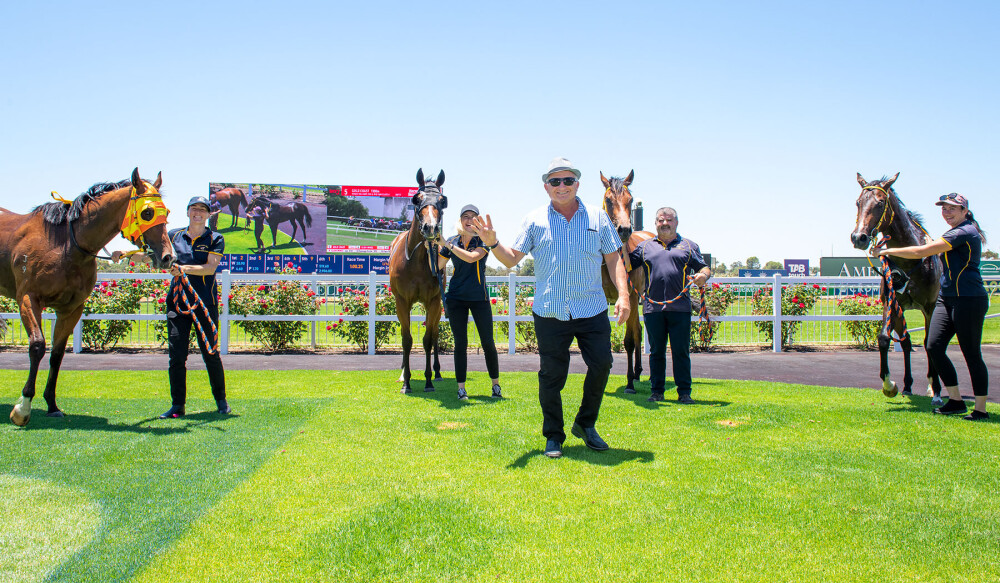 “That was a bit of a surprise,” Harrison (pictured) said after Sunny Honey defeated his more fancied stablemates before surviving an objection from Lucky Sue’s jockey Natasha Faithfull.  “I’ve had a trifecta a couple of times but never a First 4.  I don’t know if it’s ever has happened with just four runners.  Chris Waller would have done it but he has seven or eight horses in races.

“I was pretty casual about the protest,” Harrison added.  “I didn’t say a word and told the stewards they could work it out.

“The winner is a work in progress and I thought he was the worst of the four today,  But he’s a lovely type, like the rest of his family, and he’s going to develop into a real good horse as a three year-old.”

Harrison also revealed Snippenova was the only one of the quartet eligible for the Magic Millions 2YO Classic at Pinjarra next month.  Sunny Honey didn’t go through the yearling sale – he is raced by Harrison in partnership with Lex & Shirley Piper, Graham & Megan Donovan and Grant Burns.

“He’s still green,” winning jockey Paul Harvey said.  “The family have all been like that early in their careers and he’s no exception.  We were a fair way back and he had a bit to do but was very good through the line.”