Amelia Park sprinter Miss Conteki has repaid her purchase price many times over and her residual value has continued to climb this month with Listed victories in the LR Summer Scorcher (1000m) and Miss Andretti Stakes (1100m).

She arrived from another postcode on Perth Cup Day to defeat east-bound filly The Front Page (Sessions) by a long neck in the Summer Scorcher.  She repeated that win when rocketing home in the Miss Andretti on Saturday. (Western Racepix Photo). 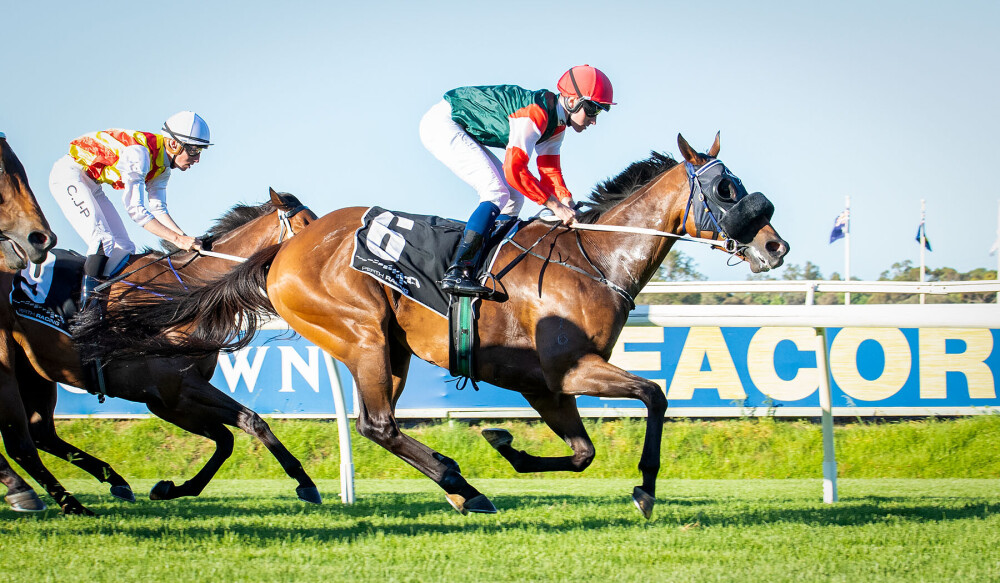 The Simon Miller-trained short-course specialist was a $55,000 buy as a foal from Coolmore Stud at the 2017 Inglis Australian Weanling Sale.  She is a half-sister to G3 BRC Gunsynd Classic winner Dreams Aplenty (Dream Ahead).

Sold with a PPT to Coolmore Stud shuttler Magna Grecia (Invincible Spirit), she foaled a colt by the G1 English 2,000 Guineas winner and was bred back to Snippetson in November.

Meanwhile, Miss Conteki is being discussed as Group 1 chance for the 2022 Ascot Masters.  “She can develop into a Winterbottom Stakes contender,” jockey Chris Parnham predicted.  “She was no hope after being so far out of her ground in both wins.  It’s amazing for her to give them that sort of head-start and still get there.”

Amelia Park’s Green, Red & White livery will be seen to advantage by several other exciting prospects this year.  Adam Durrant will give Disengo (Toronado) an opportunity to qualify for the G2 WATC Derby and Tony McEvoy believes recent Adelaide winner Speed Lover (Street Boss) is set for better grades.

Speed Lover’s half-sister by Nicconi (Lot 76) is one of 8 yearlings catalogued by Amelia Park for the 2022 Perth Magic Millions next month.  Its Toronado colt (Lot 141) is a full-brother to Disengo.