Snipillicious has returned from an injury-enforced spell to qualify for the $100,000 Westspeed Platinum Autumn Final (1200m) at Ascot on April 23.

The Snippetson sprinter sat in the box-seat behind Sioux City in a Heat of the Autumn Series last Saturday and was untroubled to score by more than a length over 1000m.  “He looked the winner on the turn and Clint (Johnston-Porter) was able to ease up before the line,” trainer Adam Durrant said.  “He’s durable and honest and can earn his stripes this time in.”

Snipillicious (4g Snippetson – Foxalicious by Due Sasso) was all set to make an impact earlier this season but a stable accident saw him sidelined for three months.  “He won a Saturday race first-up at Belmont and I was impressed because it was a big upgrade on his previous prep. 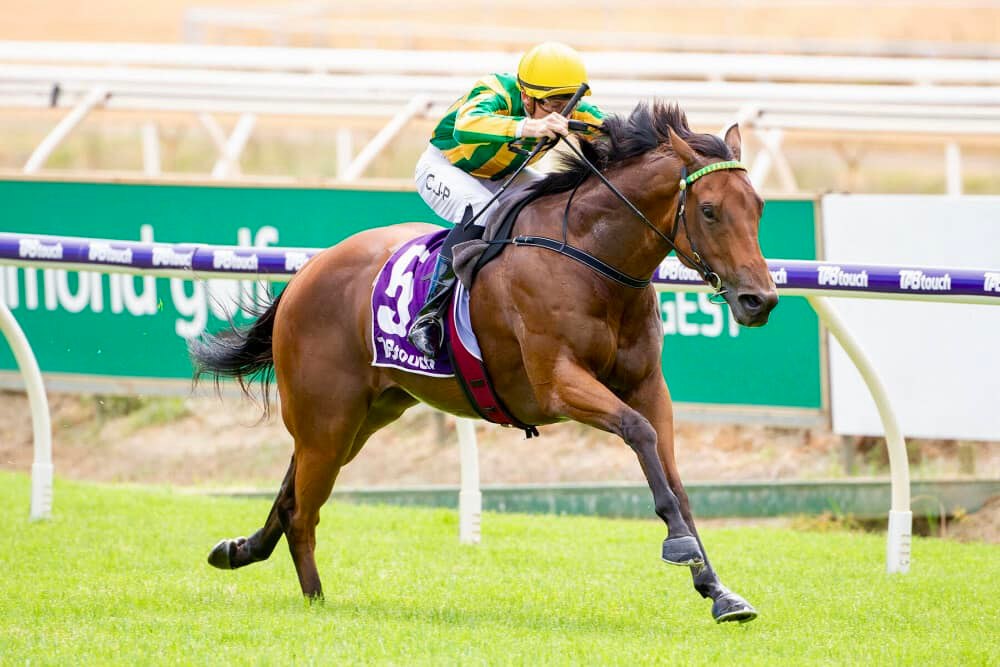 “But then he somehow swung around in his box and was unable to put any weight on a hind-leg.  It was nothing too serious but we had to let nature take its course and then start again where we left off.”

Johnston-Porter went into the race confident off a winning trial at Lark Hill.  “We were in a good spot and he never felt like getting beaten.  He settled nicely and I can’t see any problems getting out to 1200m in the Final.”

Snipillicious (Photo: Western Racepix) was bred and sold by Scenic Lodge for $26,000 at the 2019 Perth Magic Millions and is the first foal to the races from a mare who won five times over the minimum trip in town for trainers Craig Wright, Ross Price and Stephen Miller.

Durrant also prepares his 3yo full-brother Foxy Son who ran a first-up fourth at Ascot last month.  He’s ready to break through as is his unraced 2yo full-sister Praecisio.  She cost trainer Russell Stewart $50,000 at the 2021 Perth Magic Millions and looked a nice type winning a Belmont trial on March 14.

Scenic Lodge has a Long Leaf – Foxalicious filly being weaned at Muchea and the mare is back in foal to Snippetson.

Snippetson is bearing down on his 500th individual winner following a maiden double last Saturday with Bay Wave (Victoria) and Bella Sprite (Kalgoorlie).  His career stats now stand at 494 individual winners of 1570 races.

His lightly-raced 3yo Featherweight returned to scale after his second win at Ascot for trainer Dan Morton on Thursday.  A half-brother to LR Ascot 1000 Guineas winner Like A Butterfly (Blackfriars), he was a $45,000 graduate from Scenic Lodge at the 2020 Perth Magic Millions