West is best for All American

Westriver Miracle has been an all-purpose galloper for Geisel Park sire All American and his owners Ted & Bev Hill.

The lightly-raced gelding was saddled by his fourth trainer in seven starts to win the Amelia Park Hcp (1400m) at Belmont on Wednesday.  Fresh and eager to go faster while tracking Ensign Pulver (Harbour Watch), he took advantage of the cutaway to cling on for a long neck victory over Lucky Heart (Universal Ruler). 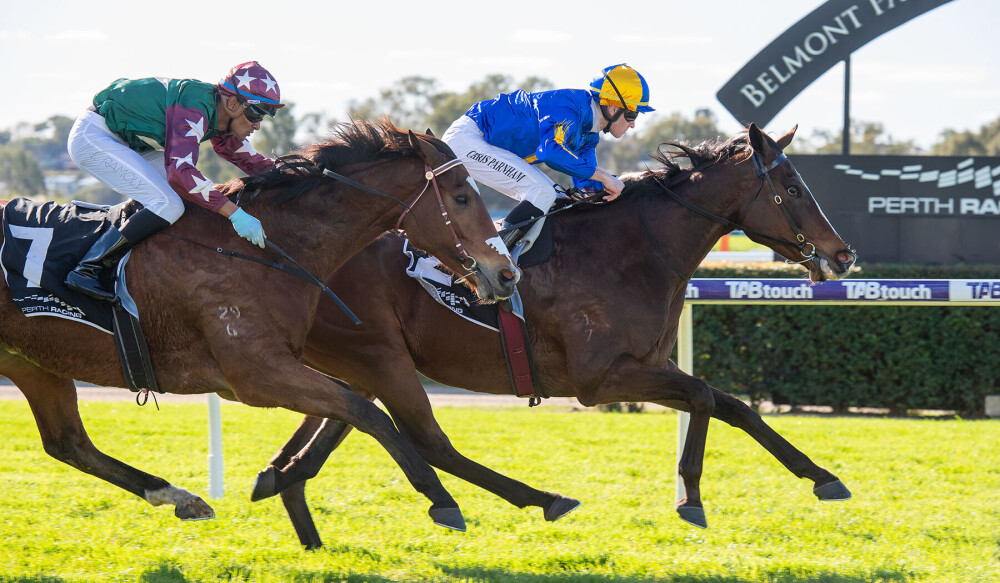 Westriver Miracle (Photo: Western Racepix) was having his first start for Pearce Racing after closing his last campaign with wins at Belmont and Pinjarra in December.  “He’s a beautiful horse and came to us in top order,” co-trainer Dan Pearce said.  “I was confident on the corner and he had enough zip to sprint through along the rails.  On that performance, he’s only going to get better over a mile.”

The Hills ran sheep on their farm in West River between Jerramungup and Ravensthorpe.  Among their better gallopers was Westriver Kevydonn (Danetime) who won the G3 Asian Beau Stakes at Ascot in 2012.

Westriver Miracle was bred by Geisel Park manager Conor Dunlop and his partner Rachel Skinner.  His dam Soliloquy (Trade Fair) is from the family of Burglar Of Bamff (G3 Ipswich Cup) and Yodelay (LR Furious Stakes) and she was one of the first mares covered by All American at the Myalup stud in 2016.

Soliloquy has an unraced 2yo colt and a yearling filly by Vert de Grece (Ire).  She followed up with a filly by All American and was covered by him again last October.