Rangeview Stud stallions Galah and So Secret went on a bender this week winning six races in just three days.

It started at Broome on Tuesday and went to another level at Balaklava and Belmont on Wednesday before a flying finale at Northam on Thursday.

Galah gelding Dance Cockey scored for the fourth time in his last six starts on the Pearl Coast with an all-the-way victory in the $40,000 Broome Sprint (1300m) on Tuesday.  Part-owned and trained by Carey Martin, he had broken the track-record over the same distance last month when clocking 1.15.11s. 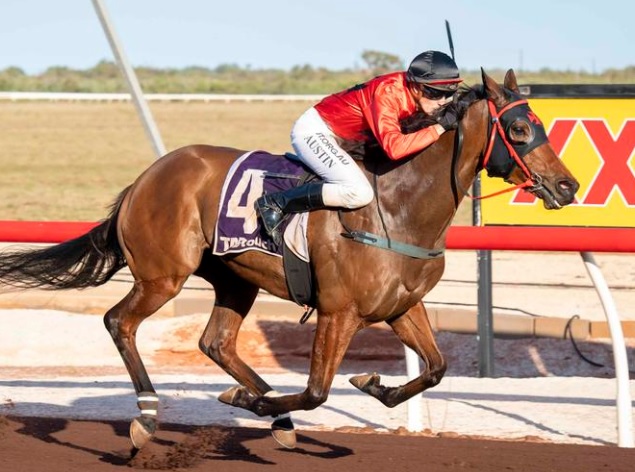 Dance Cockey (Photo / Western Racepix) was bred and sold by Bellbridge Park’s Siobhan Campbell for $24,000 at the 2018 Perth Magic Millions and is the first foal of Ascot winner Korenica (Trade Fair).  Her latest is a 2yo filly by So Secret.

On Wednesday, So Secret started an awesome afternoon at the office for Rangeview when his front-runner Closed Vault scored second time out at Balaklava.

He was a $26,000 buy for Richard & Chantelle Jolly out of the Rangeview draft to the 2020 Perth Magic Millions.

“It’s so good to see him here and winning,” Chantelle Jolly claimed after a narrow victory in the Terminus Hotel Maiden (1200m).  “He had actually been a late scratching twice through no fault of his own after already arriving at the races.

“Dad owns him with a few friends and they’ve given him time because he’s a nice type and will definitely develop into a city-class horse.”

Closed Vault is the fourth winner from four to the races from Movies By Burswood (Ihtiram) who hasn’t missed in seven seasons at stud for Rangeview’s Rob and Jody Gray.  She has a 3yo colt and 2yo filly by Galah and a yearling full-sister by So Secret to Closed Vault.

Trainer Steve Wolfe then saddled Knot Secret to make it an interstate double for So Secret at Belmont prior to Galah chiming in with a winning double of his own through Bird’s The Word and Canny Jack.

Galah put an exclamation mark on the Rangeview run when Let’s Galahvant was a runaway winner of the Milne Muesli Hcp (1300m) at Northam on Thursday.  His current campaign resembles Dance Cockey with four wins in his last seven starts for Pearce Racing

“He settled in the box seat for Taj (Dyson) before muscling his way into the clear at the top of the straight,” co-trainer Ben Pearce reported.  “He went straight past the leading brigade to score by three lengths on the line.”

Let’s Galahvant was a bargain $10,000 buy at the 2020 Perth Magic Millions and has now earned almost $150,000.  His dam Secret Crush (So Secret) is a half-sister to Keyton Grace and Shock Value who were both black-type winners by former Rangeview sire Key Business.

Galah (Redoute’s Choice) stood at Rangeview for six seasons until 2019.  So Secret (Danetime) has been an ever-present with the Gray family since 2009 and he will stand for a $2,750 fee this year with Long Leaf (Fastnet Rock) who covers his third book for a $5,500 fee.