Winner of the Week – Bernbrae 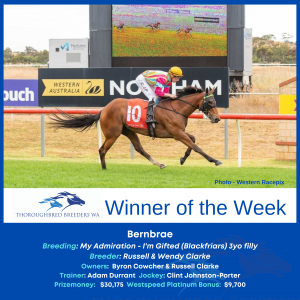 Westbury Park stallion My Admiration just missed out on a black-type victory when Eeyore Wayz was runner-up in the LR Northam Cup (1600m) on Sunday but there was a promising consolation win earlier in the afternoon courtesy of Bernbrae.

The Adam Durrant-trained 3yo filly bolted in when getting out to 2200m in the Avon Valley Toyota Maiden.  Still in her first prep, Bernbrae had been placed in all three prior outings while stepping up in distance.

“She probably should have broken through before now so it’s good to see her get that win,” Westbury Park’s Phil Ibbotson said.  “If she keeps progressing, Adam thinks she might make a WA Oaks filly in the autumn.”

Bernbrae is the fourth My Admiration winner for Durrant Racing and her dam I’m Gifted has now foaled five winners from five to the races.  She was a precocious filly for Dan Morton winning the 2006 Initial Plate (1000m) at Belmont and earning black-type later that season when placed in the LR Gimcrack Stakes at Ascot.

Bernbrae was bred by Serpentine couple Russell and Wendy Clarke and is raced in partnership with Byron Cowcher.  “Russell and I are partners in Bernbrae’s yearling full-brother who has been entered for the 2023 Perth Magic Millions,” Ibbotson said.  “And My Admiration covered I’m Gifted again on the weekend.”

My Admiration (Encosta de Lago) stands for a $4,400 (inc GST) fee at Westbury Park and he has built up an overall 64% winning strike-rate.  There have been 10 individual winners in as many weeks this season led by Devonia who doubled-up at Belmont for Brian Lucas last month.

Native Chimes completed a hat-trick for Aaron Pateman in the Carnarvon Cup and then finished a half-length third in the Kalgoorlie Cup.  Eeyore Wayz has been just as productive for Raquel Reid – the Northam Cup placing sent his earnings through $300,000.