Winner of the Week – Pearly Nuggett 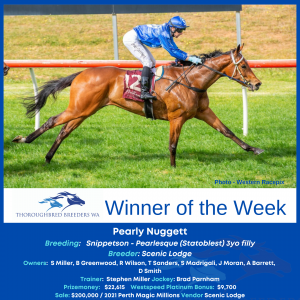 Pearly Nuggett has been turning heads since she was a yearling and she lived up to those looks with an eye-catching victory at Northam on Sunday.

Racing second time out in the Gannons Blinkers Maiden (1300m), the Stephen Miller-trained filly jumped straight to the front and maintained a winning margin from start to finish.  Jockey Brad Parnham showed her the stick in the straight but only used it once as a reminder at the furlong.

Pearly Nuggett was the top-priced filly at the 2021 Perth Magic Millions when graduating for $200,000 out of the consignment from Scenic Lodge.  It was a PB for Scenic Lodge and for her sire Snippetson in WA.

“It’s nice to get that recognition,” Scenic Lodge general manager Jeremy Smith said in the Swan Valley.  “Although we had a lack of eastern states representation, she was really popular with our local buyers.

“She’s a typical Snippetson – strong with plenty of size and a black-type page.  She’s a stunning filly and is bred to be a star being a half-sister to Friar Fox and Friaresque.”

Their dam Pearlesque completed a running double at Ascot in December 2010 and she is a full-sister to multiple Listed winner Impressive Stats (WA Australia Day Stakes, R S Crawford Stakes and H G Bolton Sprint).  Her latest foal is a 2yo gelding by Universal Ruler that made $75,000 to the bid of Adam Durrant at the 2022 Perth Magic Millions.