January has been a whirlwind for Gold Front Thoroughbreds and there won’t be any respite until the last of its Perth Magic Millions yearlings find new homes next month.

Gold Front owners Alan & Sue Olive sold fillies by Russian Revolution and Vancouver on the Gold Coast and followed up with a city double this week at Ascot (Speedbird) and Belmont (Disco Donut).

“It’s very busy but I love this time of the year,” Sue said after preparing Disco Donut to win the Amelia Park Lodge Maiden (1000m) on Wednesday (Photo: Western Racepix).  “The yearlings are coming to hand and the trainers and their clients are calling in for inspections.  We may have to wait a bit longer than anticipated for our Yearling Sale which is a shame but everyone is doing the right thing.” 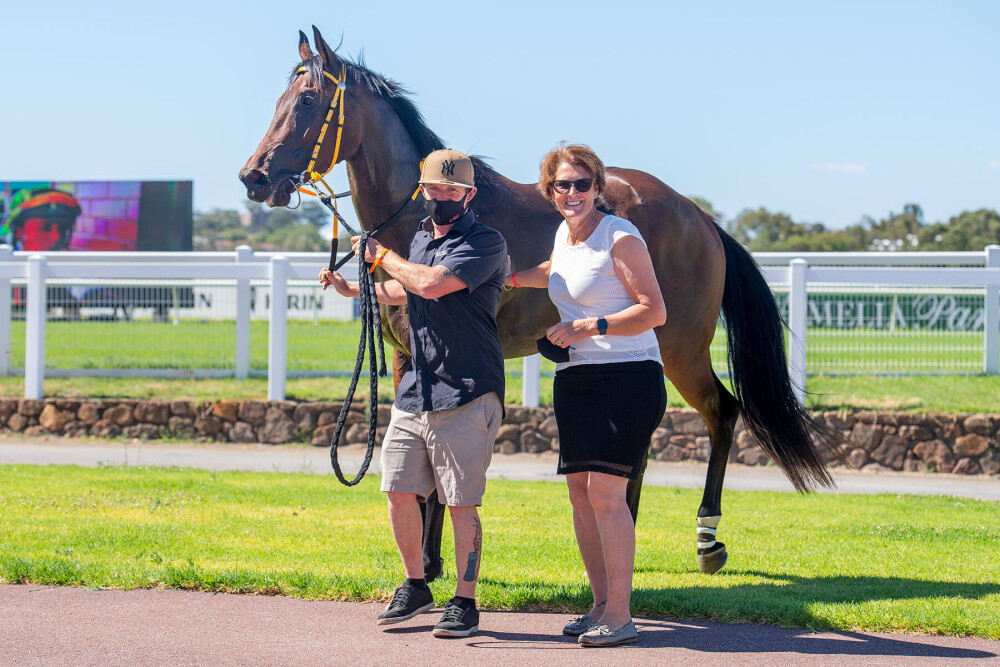 Disco Donut (3g Safeguard – Most Joyous by Viscount) was facing the starter for just the third time but was good enough to change course in the straight and then overhaul Men’s Club (Rommel) on the line.

“I was shocked when he was held up but it was so exciting when he got out and came home.  Hats off to Kyra (Yuill) for the ride.  She’s amazing.”

Disco Donut was bred by Gold Front and is from a half-sister to G1 Railway Stakes winner Covertly (Metal Storm).  He was drafted to the 2020 Perth Magic Millions but was passed-in after failing to reach a reserve of $30,000.

“His x-rays weren’t the best and the vets said to give him plenty of time,” Sue recalled.

“He came in after nine months but still had some soundness issues.  We decided to throw him out again and, as someone once told me, let Dr Paddock do the healing.”

Speedbird is on a hat-trick after her win at Ascot on Monday and it was a value-added victory with her half-sister by Gold Front sire Awesome Rock catalogued as Lot 300 for the Perth Magic Millions.  She the first foal to race from Governing (Snitzel) who goes back to Champion broodmare Stage Hit (Century).

“Her Magic Millions filly is shaping up nicely and, if anything, she’s thrown to Snitzel,” Olive said.  “Our Rich Enuff – Prete a Partir colt (Lot 13) also looks an early runner and will take after his mother.”

Prete a Partir had won an Ascot nursery on debut in March 2014 and was beaten less than two lengths second-up in the G2 Karrakatta Plate won by Hobart Jones.  Her 3yo by Written Tycoon won a Randwick trial as Whitson Boy this time last year and he was straight out of the blocks in Hong Kong on New Year’s Day winning the Palm Hcp (1200m) under the new name of Eason.

Gold Front goes to the Perth Magic Millions with 19 yearlings after selling a Vancouver filly to Lindsay Park ($120,000) and Russian Revolution filly to Bennett Racing ($100,000) at the Gold Coast Magic Millions.

The Lindsay Park filly has already been syndicated and Nathan Bennett believes the Russian Revolution is a no-brainer.  “She’s a racy chestnut and is light on her feet,” he said after signing the iPad.  “The sire is on fire and she should get up and go early for Tony Gollan.”

Across the road, Gold Front-bred graduate Outlandos ran a career-best second in the $1million Magic Millions Subzero (2400m) on January 15.  The Dissident gelding collected $191,000 for clients of John Sargent after powering home to get with a length of Navy Cross.

Gold Front sold Outlandos through Newgate Farm for $300,000 at the 2018 Gold Coast Magic Millions and the Olives sent his dam to Rocksan (Fastnet Rock) to Shalaa last year.

Magic Millions is liaising with WA vendors and buyers and an announcement is expected early next week as to whether the original Perth Magic Millions Sale dates of  February 14 and 15 will be retained or revised following WA Premier Mark McGowan’s decision to keep WA’s border closed.

Buyers who cannot attend the Perth Magic Millions Sale can bid with confidence through accredited on-site bloodstock agents at the Swan Valley sale-ground.