Willaview Park consigned its first yearlings to last year’s Perth Magic Millions and the first winner from that draft arrived at Belmont on Wednesday.

Saintorio (Oratorio) opened the Narrikup nursery’s account in a 1200m juvenile for part-owner and trainer Stephen Miller.  Left in front a long way out, he was strong through the line to score by over a length from Celebrity Icon (Astern) and Penny On The Queen (Universal Ruler).

Miller had pin-hooked Saintorio (Photo: Western Racepix) for $20,000 as a new-season yearling at the Mungrup Stud Dispersal in August 2020 and then put him through Willaview Park (as agent) for the Perth Magic Millions in February 2021. 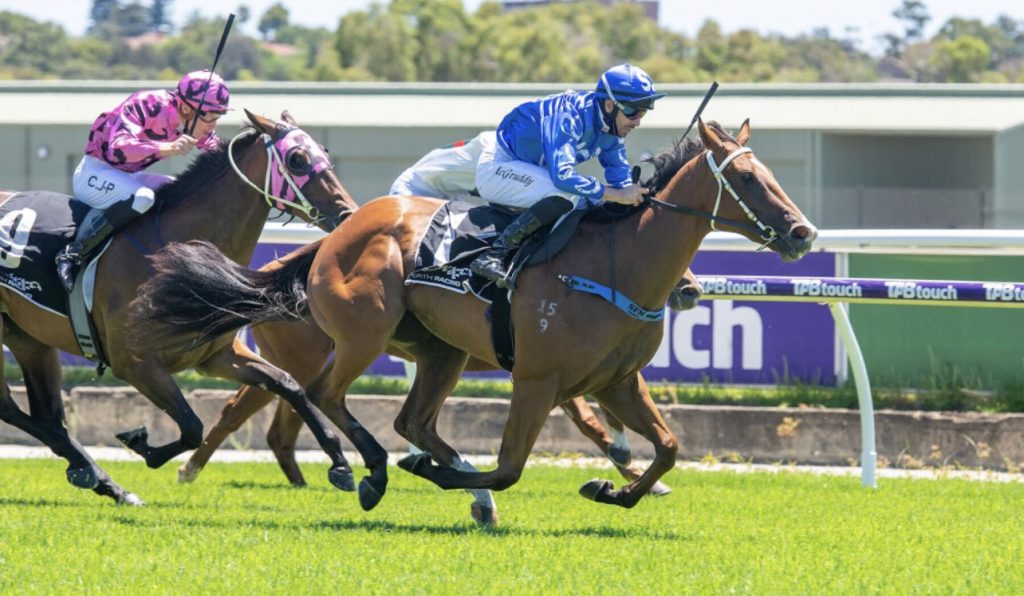 “He didn’t make the reserve so I put a group of people in him and now everything looks good,” Miller said.  “He’s a casual bloke and his first two runs were too short.  ‘Shooter’ (McGruddy) reckoned he was looking for 1200m and it worked out today.”

His sire Oratorio has 11 yearlings entered for the Perth Magic Millions next month and among them is the full-sister to Saintorio being offered by Ridgeport Holdings as Lot 159.

Their dam Leitfaden (Choisir) was purchased by Ridgeport owner Santo Guagliardo for $30,000 carrying the Oratorio filly at the Mungrup Dispersal.

Leitfaden was an Ascot 2yo winner for Dan Morton and her page is overloaded with black-type through second-dam Marooned Lady (Marooned).  Her latest foal is a filly by Ridgeport sire Rommel.

Willaview Park’s Claire Williamson recalls Saintorio as a lovely, relaxed colt and she has another 12 yearlings prepping for the 2022 Perth Magic Millions starting with the auction-opener, an Oratorio colt from New Vogue (Lot 1).

He’s a half-brother to Butterfly House (The Last Lion) who won her maiden on debut at Northam in October for Ascot trainer Dean White and his wife Christine.

Oratorio (Stravinsky) claimed five WA 2YO titles in his prime and three of them coincided with his G2 Karrakatta Plate winners Gold Rocks (2009), Motion Pictures (2010) and Lucky Street (2015).

Willaview Park notched another first at Belmont in November when Costume Party cut the ribbons for resident sire A Lot (USA).  “His stock look like athletes and we were sure they would go early,” Williamson said.  “He’s by Tapit and still holds the USA record for 1400m on turf.”

A Lot’s second crop yearlings catalogued for the Perth Magic Millions include two colts from Willaview and two colts being prepped by Claire’s father Gray Williamson under Mungrup Pty Ltd.

“Costume Party helped A Lot receive lots of late-season bookings and our colt from Hottington (Lot 306) is the epitome of his sire,” Williamson declared.  “The mare’s first Oratorio foal Hot Blooded won a 3yo maiden for Lou Luciani at Northam in November.  And her second is a 2yo filly named Hotorio with Dave Harrison.”

Hotorio was a close-up fourth to Swim Through (Patronize) when racing second-up at Belmont last month and has accepted for the Magic Millions Plate (1000m) at Ascot this Saturday.

Hottington (Red Hot Choice) is an unraced half-sister to the dam of Playing God’s Group 1 galloper Platoon and she was one of those late covers for A Lot last season.

Williamson also reports Playing God’s recently retired Group 1 Kingston Town Classic winner Kay Cee has a cracking full-brother on the ground at Willaview.  Their dam Flirt ‘N’ Hope (McFlirt) is owned by Greg and Kathy Edwards and she has a final-crop PPT to ill-fated sire I’m All The Talk.

Another well-bred foal at Willaview is the A Lot half-sister to 2020-21 Champion WA 2YO Ex Sport Man (Playing God).  Bred by Don O’Shannessy, he was a unanimous choice for that award after wins in the RL Magic Millions Classic and G2 Karrakatta Plate.

Buyers who cannot attend the Perth Magic Millions Sale can bid with confidence through accredited on-site bloodstock agents at the Swan Valley sale-ground.