Pixie Chix (pictured) was bred by Santo Guagliardo and sold through Mogumber Park (as agent) for $20,000 at the 2021 Perth Magic Millions Yearling Sale.  Purchased by bloodstock agent John Chalmers for a ladies’ syndicate with trainer David Harrison, she has now earned $319,137 including Westspeed Bonuses of  $117,20. 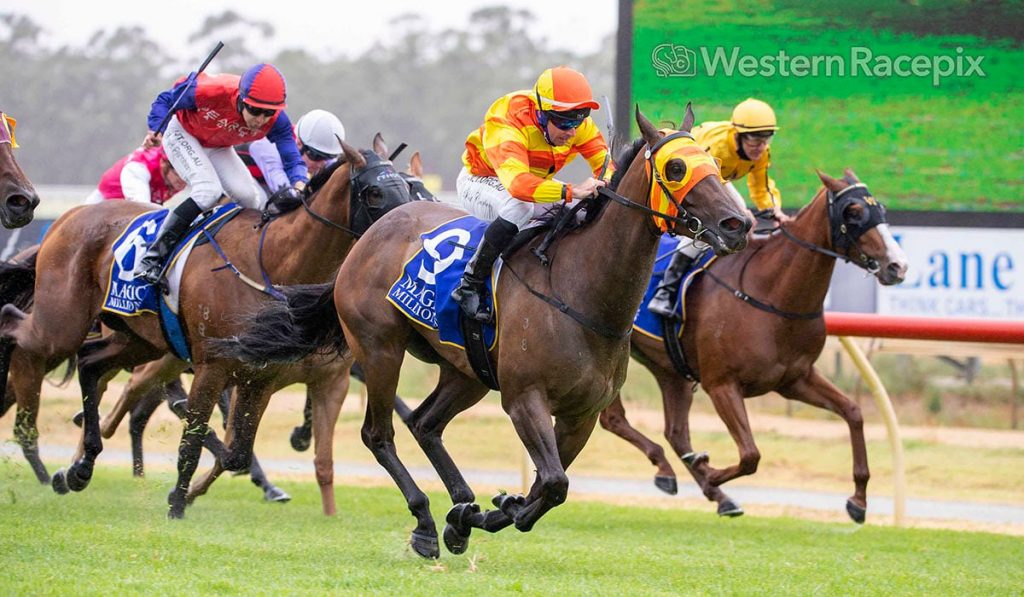 Harrison had won last year’s Magic Millions WA 3YO Trophy with Gemma’s Son (Snippetson) and he was confident of completing a running double when Paddy Carberry put her to sleep at the back of the field.

“That’s the way you have to ride her,” Harrison said after the half-length victory over Gorgeous Gossip (I’m All The Talk) and Black Fantasy (Blackfriars). “She needs to be cuddled up and ridden for luck.  Paddy pushed his way out and found a run between horses.

“It’s great for all the girls, and it’s all come together today.  Most of them have been with me for 30 or 40 years and they’re all excited.”

Guagliardo raced Rommel to Stakes wins in Perth and Melbourne and the son of Commands was Champion WA 2YO and First-season Sire in 2020-21.

Pixie Chix had won at Ascot as a February 2yo last year and was beaten a nose by Liwa in a head-bobbing finish to the LR Supremacy Stakes.  She also won a Magic Millions WA Women’s Bonus as the first all-female owned horse home in last year’s Magic Millions Classic.

Her dam Snow Pixie (Snitzel) had been purchased by Neville Parnham and Guagliardo for $75,000 from Kia-Ora Stud at the 2014 Inglis Melbourne Premier Yearling Sale.  She didn’t race but is off to a good start at stud foaling Pixie Chix first-up followed by her full-brother Snowdome.

Guagliardo races Snowdome in partnership with the Parnhams, Bob Pearson and Mike Fagan.  The colt showed enough potential to make the grade when runner-up to Revitup and Street Parade in two Ascot nurseries earlier this season.

Snow Pixie changed hands at the 2020 Inglis Digital April Sale for $9,000.  She changed hands carrying a PPT to Safeguard and subsequently foaled a colt by the Mogumber Park sire for Gingin breeder John Latham.

That colt has been catalogued as Lot 217 by Gingin-based Gold Front Thoroughbreds (as agent) at the 2022 Perth Magic Millions.