Craig Thompson has a golden touch breeding 2yo stakes winners and he did it again with Sheeza Belter in the RL Magic Millions WA Classic (1200m) at Pinjarra on Sunday.

Thompson and his wife Rose (pictured) own Mt Hallowell Stud where they concentrate on quality rather than quantity and that paid off last year when their homebred filly Hoi An (Longma) won the G3 Gimcrack Stakes and G3 WA Sires’ Produce Stakes. 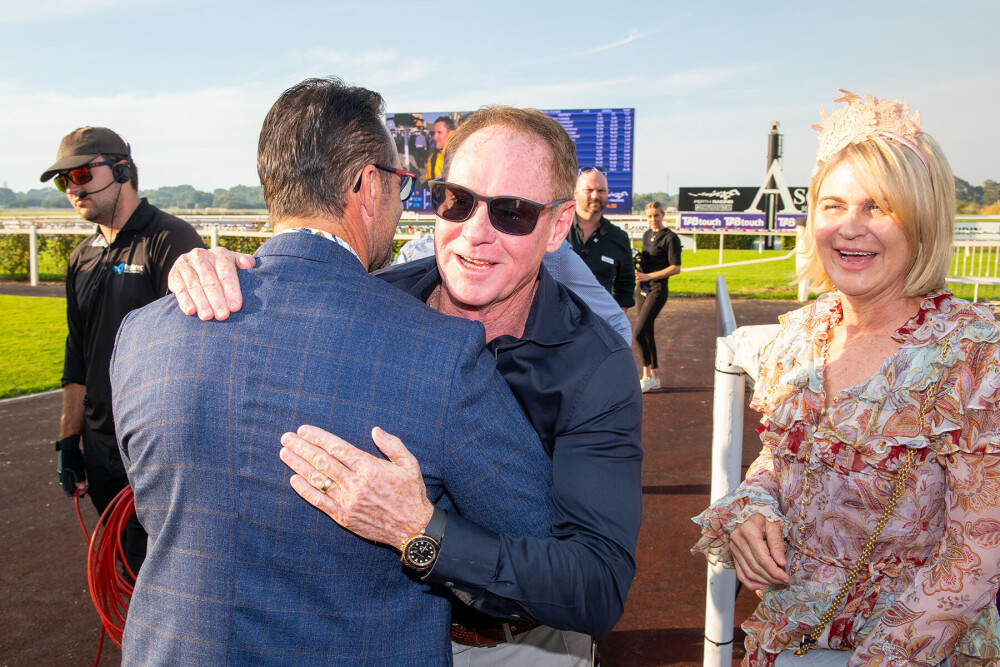 They raced Sheeza Belter’s sire and dam and sold her for $50,000 at last year’s Magic Millions Sale in the Swan Valley.

“We’re so happy for her owners and trainer Luke Fernie,” Thompson said.

“She was initially passed-in but we did a deal with Justin Warwick through David Houston at Magic Millions.

“I guess Gold Standard is an unknown quantity here in Western Australia but he was a top-class racehorse.  I can still see him galloping with his head down and ears pinned back.

“He won the (G2) Stan Fox Stakes at Rosehill easily beating a quality field which included Trapeze Artist, Addictive Nature, Ace High and The Mission and also finished fourth in the (G1) Golden Rose won by Trapeze Artist.  He went to Melbourne but broke down in the (G1) Caulfield Guineas.

“Gold Standard is a son of Sebring who is by one of my favourite sires More Than Ready.  We retained 10 lifetime shares after selling him to stand at Spendthrift Farm.”

Sheeza Belter is his first winner and first Stakes winner and Mt Hallowell has a couple of soon to trial 2yo’s, a filly named Sisu Warrior with trainer Roy Rogers and a colt named Gage Roads with Luke Fernie.

“There’s plenty of upside seeing the Magic Millions was over 1200m,” Thompson predicted.  “I can see her running out a sold 1600m and even further next season.”

Thompson bought into the female side of the family when he purchased Kiseki Belle (Fuji Kiseki) from the Dispersal Sale of Multiplex owner John Roberts.  She had already foaled Special Kiseki who went on to produce the Stakes winners Special Reward, Showy Chloe and El Rijes at Taunton Vale.

Saxabelle was her first Mt Hallowell-bred filly and she won twice in town before going to stud.  “She foaled an outstanding colt by More Than Ready after Sheeza Belter and we bred her back to Brave Smash (Jpn) last year.

Her 6yo daughter Grand Design (Master Of Design) has won five times to date, including two at Ascot, and she will be covered by Gold Standard later this year.

The Thompsons launched Mt Hallowell Stud at Denmark on the southern tip of Western Australia in 2005.  Craig’s love of all things horses began when he spent school-holidays with his grand-father who was a farmer in the Great Southern.  And he could afford to indulge after building his shipping house, namely Thompson Shipping Group, which consists of Ship Owning, Vessel Operating and Seacorp, which specialises in Ship Agency and associated services.

Santos won the Skyline five years after I’m All The Talk and, with all due respect to the recently-deceased WA champion, he was a superior 2yo and is a son of champion sire I Am Invincible.

Trained by Gai Waterhouse & Adrian Bott, Santos was placed in the LR Breeders’ Plate on debut and then won the Pierro Plate back at Randwick before landing the Skyline as an odds-on favourite.  He is based at Aquis Farm in Queensland and Mt Hallowell has three of his first-crop colts being prepared for the Perth Magic Millions.

Lot 26 from Royale Faux Pas (Al Maher) is a half-brother to Ascot winner Jingtang and their dam is a half-sister to G2 VRC Kewney Stakes winner Elegant Fashion.  It’s also the family of Fashchanel (I Am Invincible) who is on a hat-trick in Sydney for John O’Shea.

Lot 57 is the Santos colt out of Stakes placed mare Triband (Fastnet Rock).  His close relation El Padrino won the RL Inglis Nursery in December and finished fourth in the RL Inglis Millennium on Saturday.  He’s already earned $350,000 and another $900,000 awaits the winner of the G1 Blue Diamond Stakes back home at Caulfield later this month.

Lot 153 is the first foal of Stakes-placed Melbourne winner Khutulun (Soldier’s Tale).  His second-dam Great Tradition (Rock Of Gibraltar) is a three-quarter-sister to Blackfriars.