The two-day Perth Yearling Sale commences at 4pm (AEST) on Tuesday and inspections have been conducted in extremely hot conditions with the mercury failing to drop below a blistering 38 degrees all week in the Swan Valley.

First cab off the rank at Ascot was front-runner Man Crush (Manhattan Rain) in the Belhus Racing Stables Plate (1000m).  He was a $45,000 graduate of the Misty Valley Thoroughbreds consignment to last year’s Magic Millions and continues the winning run for Luke Fernie’s juvenile team this season.

“He’s a ripper and is one of our favourites at home,” Fernie said.  “He ran fourth in the Magic Millions Classic from a wide barrier and I thought he could have just about beaten the winner from a better draw.  He’s versatile and carried 59kg today.  I think he’s going places for the owners.”

Misty Valley’s Tony Patrizi bought into the family when he sourced NZ Group 1 winner Juice (Bertolini) and her daughter Crushed (All Too Hard) who foaled Man Crush first-up at stud.

Patrizi has a Bondi – Juice colt catalogued as Lot 311 for this week’s Perth Magic Millions and he’s the last of 15 yearlings being offered by the Capel nursery.

The Justine Erkelens-trained sprinter had been knocking on the door since a six-month spell and jockey Shaun O’Donnell stole a march on their rivals to notch his second win following a Northam maiden in May 2021.

Spirited Session (Sessions) has a full-brother catalogued as Lot 31 by Dawson (as agent) for Anita Vale owners Robert and Anne Anderson.

In the lead-up to Saturday’s win, Dawson manager Milkis Lutchmun described the colt as an amazing individual.  “He handles the work-load and then heads to the feed-bin,” Lutchmun explained.  “He’s compact, well put-together and won’t disappoint prospective buyers.

Their dam Sebring Lane (Sebring) won a Geelong maiden for Mick Price before transferring west to score twice at Pinjarra for Dan Morton.  Her latest foal is a colt by Playing God.

Dawson Stud was also in the frame with its 2018 Perth Magic Millions graduate All in Red (Blackfriars).  She closed out the card in the Heineken Hcp (1800m) when presented with a nicely-timed finish by Peter Knuckey.

Scenic Lodge sire Snippetson weighed in twice with Spin The Knife and Downforce.

Downforce is a half-brother to Group 1 winning mare Silent Sedition (War Chant) and he made $100,000 for Amelia Park when changing hands through Berkeley Park at the 2018 Gold Coast Magic Millions.

Mungrup Pty Ltd has five colts being prepped for the Magic Millions by Gray Williamson including the half-brother to Holy Enchantment (Playing God) who won the Drummond Golf Hcp (2200m).

The Oratorio colt has been catalogued as Lot 168.  Their dam Majantic (McFlirt) is a full-sister to Stakes winning stayer Global Flirt and Holy Enchantment should also break through at black-type level after placings in the LR J C Roberts Stakes and RL Magic Millions Trophy.

At Morphettville on Saturday, I’m All The Talk mare All Banter notched a fifth victory in 11 starts for trainers Richard & Chantelle Jolly.  Her career-high win to date was in the LR W J Adams Stakes at Caulfield on Australia Day last year.

Alwyn Park (as agent) will offer her half-brother by A Lot (USA) as Lot 81 on Tuesday.

Namerik sells a Spieth – Raffinato (Fastnet Rock) chestnut filly as Lot 21 on Tuesday and she was one of the highlights at the TBWA Yearlings Showcase in the sale arena on Friday afternoon.

The Magic Millions team were taken by the Spieth filly during inspections at Namerik in Serpentine.  “She’s a beauty and I will walk to China if she doesn’t get up and run,” auctioneer Grant Burns declared.  “There’s so much to like.  She’s by an exciting young sire and moved ever so gracefully when we saw down at the farm.” 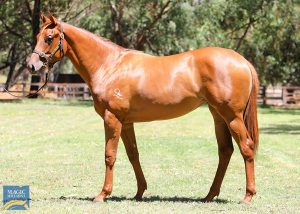