Sichern might be a late-bloomer from Safeguard’s record-breaking first-crop but he’s making up for lost time with south-coast trainer Liz Strempel.

The 5yo gelding didn’t debut until this time last year and he didn’t reappear for his second prep until last month.  He won a Pinjarra 1200m maiden first-up on January 20 and doubled-up over 1300m at Belmont on Wednesday. 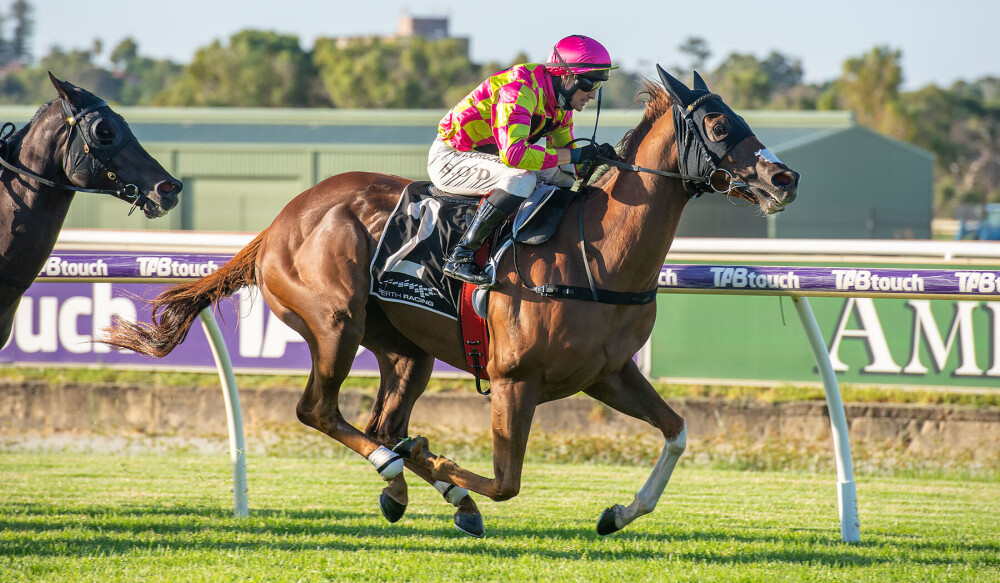 Sichern (Photo: Western Racepix) jumped to the front for Shaun O’Donnell yesterday but handed up the lead to Pepper Assault.

He peeled off the front-runner’s heels to keep Irritable Rodnee three-wide without cover and then surged off the home turn to score convincingly.

“All the connections have been so patient and understanding,” Strempel said.  “This sensational chestnut is coming from a long way.  He was impressive at Pinjarra and made it two in a row at Belmont for the team who have been through a lot in the last few weeks.”

Sichern was bred by Waroona-based Anne Fisher and is the final foal of Ascot-winning sprinter-miler Nikita Blue (Polish Blue).  The best of her progeny to date has been Danablue (Husson Lightning) who was runner-up to Black Heart Bart (beaten 5 lengths) in the 2015 LR Bunbury Stakes.

Nikita Blue’s only filly Toorak Deb (Blackfriars) was retained by Nuimara Stud’s Keith Reeves.  Based at Boyanup, Reeves trained her Ascot winner Arctic Blue (Kuroshio) and has her Safeguard 2yo filly and a Sessions colt on the ground at Nuimara.

Safeguard (Exceed And Excel) sired black-type fillies Miss West Coast and Specialism his title-winning first crop conceived at Mogumber Park.  He followed up with Iseered Iseered in the second and this season’s star 3yo filly Buzzoom in the third.

His latest 2yo crop includes debutante filly Our Ecee (Bendigo) and Cosmopolitan Girl (Ascot) who will face the starter in the opening race at their respective venues on Saturday.

Mogumber Park has 3 fillies among the 9 Safeguard yearlings at the Perth Magic Millions and Lot 172 picks herself in the pedigree department.  She’s a half-sister to Elite Belle (G1 Railway Stakes) and Mississippi Delta (G2 Perth Cup).

Peters Investments sold their dam Mississippi Belle (Marooned) to Mogumber Park owner Colin Brown for $72,000 at the 2015 Inglis Broodmare Sale.  She was pensioned in September 2020, shortly after foaling the Safeguard filly entered for the 2022 Perth Magic Millions.