Group 1 WA breeder Ellie Giles is embarking on a new venture with Ruby Racing & Breeding at the Perth Magic Millions this month.

Speaking shortly after news of new dates for this year’s Yearling Sale were announced on Monday, Giles was upbeat when previewing her draft of five colts and two fillies.  And there were several good reasons for the positive spin including black-type updates in Perth and Adelaide on Saturday.

Ruby’s Jaime O’Bree and her brother Dan are prepping 18 yearlings for the Swan Valley Sale.  Having a client who has seen it all after a lifetime as a vendor is a major coup for the young siblings who are based in the mid-west at Kojarena.  “I was impressed with the way Jaime presented her yearlings last year,” Ellie said.  “The preparation was very professional.”

Giles sells under the Korilya Stud banner which has been an ever-present in the industry going back to the World War II years when her father Dick raced the likes of 1941 WATC Derby winner Kimra (Agrion).

Ellie has been to the elite level as well breeding Group 1 MVRC William Reid Stakes winner Silent Sedition.  She’s a daughter of War Chant (USA) as is the first yearling being sold by Ruby (as agent) for Korilya Stud at the Perth Magic Millions on February 22.

Catalogued as Lot 3, the War Chant – Ofcourse She Does filly is from a half-sister to Behemoth and the dam of Hot Zed.  “She’s an intelligent type and will be worth good money,” Giles predicted.  “Silent Sedition didn’t race at two and this one will probably need time, too.

“I wasn’t too surprised when Behemoth was beaten first-up on Saturday.  He’s such a big horse and that wasn’t his grand-final.  David (Jolly) told me he wasn’t unduly disappointed getting beaten and Kemalpasa is no slouch, either.”

Korilya’s colts for the Swan Valley start with the Nicconi from Northern Meteor’s Sandown Lakeside winner Sentfromthestars (Lot 32).  “I’m a fan of this colt,” Giles admitted.  “He’s an athlete with plenty of leg and he’s by the same sire as Nature Strip.  Given all that, you would assume he can gallop.”

They don’t come much better-bred out west than the War Chant – Brocky’s Ace colt (Lot 89) who is a half-brother to the Giles-bred Stakes winning sprinters Red Can Man and Quilista.  “He’s a superb specimen,” Giles said.  “Brocky’s Ace won an Initial Plate at Belmont and this colt has already shown he will go early.” 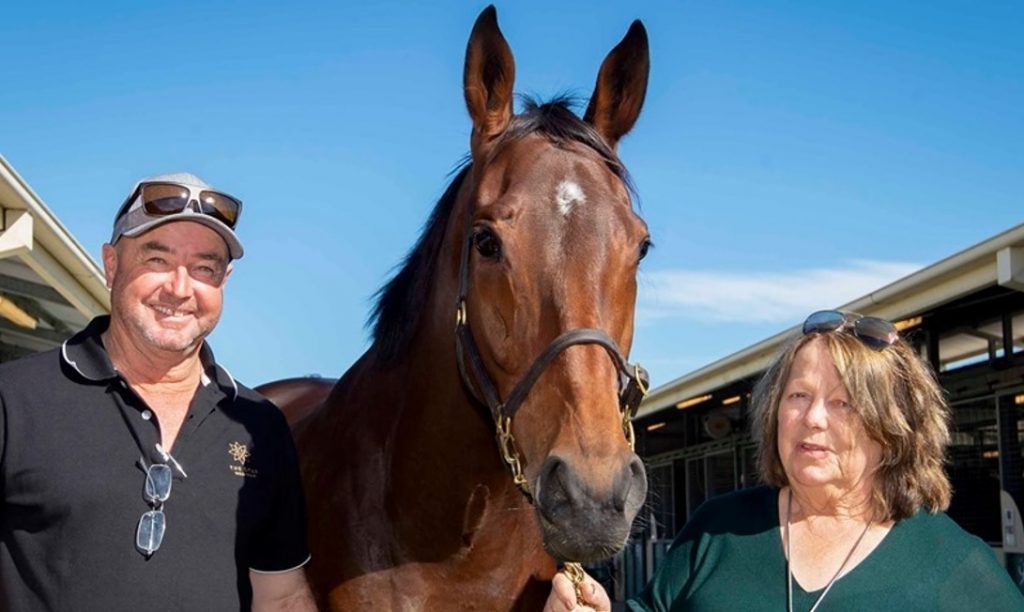 Quilista is pictured with trainer Justin Warwick and her breeder Ellie Giles after making $1million at the 2021 Magic Millions National Sale.

The Magnus – Disco Riffic colt (Lot 290) is picture-book pretty according to Giles and the Universal Ruler – Highland Jig colt (Lot 303) is from a family on fire with Coastwatch and Miss Redoble in Sydney.

Miss Redoble won at Warwick Farm on Australia Day and Coastwatch has been nominated to start first-up in the G3 Eskimo Prince Stakes at Randwick this Saturday.  He won the G3 Ming Dynasty earlier this season and was Group 1 placed in the Golden Rose.

“The Universal Ruler looked a run-of-the-mill colt at the start of his yearling prep,” Giles recalled  “But Jaime has been commenting on how he’s really come on in the last few weeks.”

The Written By – Highly Illustrious filly (Lot 304) is also taking off.  “I think she’s slipped under the radar into Book 2,” Giles declared.  “Water finds its own level but this one is maturing into a lovely type.

“Highly Illustrious has a Star Turn 2yo colt with Grant & Alana Williams and she was at Widden with the intention of going to Nicconi.  I was across for the 2019 Sydney Easter Sale and bumped into Grahame Begg at the hotel where we were staying.

“Grahame trained Written By for his father Neville and he told me they had just made the decision to retire the horse to Widden.  That was an omen tip if ever I’ve heard one so I switched to Written By and hopefully this filly will make the dream come true.”

Magic Millions has announced the Perth Sale will be deferred for eight days until February 22 and 23.  Buyers who cannot attend the Perth Magic Millions Sale can bid with confidence through accredited on-site bloodstock agents at the Swan Valley sale-ground.