Another Awesome aspirant for WA Derby

The Gold Front stallion already has unbeaten colt Rokanori among the leading fancies for the G2 WA Derby (2400m) on Saturday, April 9 and Lautre proved the Derby distance won’t present any problems when he covered every inch of the journey on Wednesday.

“We will have a throw at stumps in the Melvista Stakes in a fortnight before deciding whether to go to the WA Derby,” part-owner and trainer Brett Pope said.  “Getting over the ground will be the easy part but I don’t want to get too far ahead of ourselves. 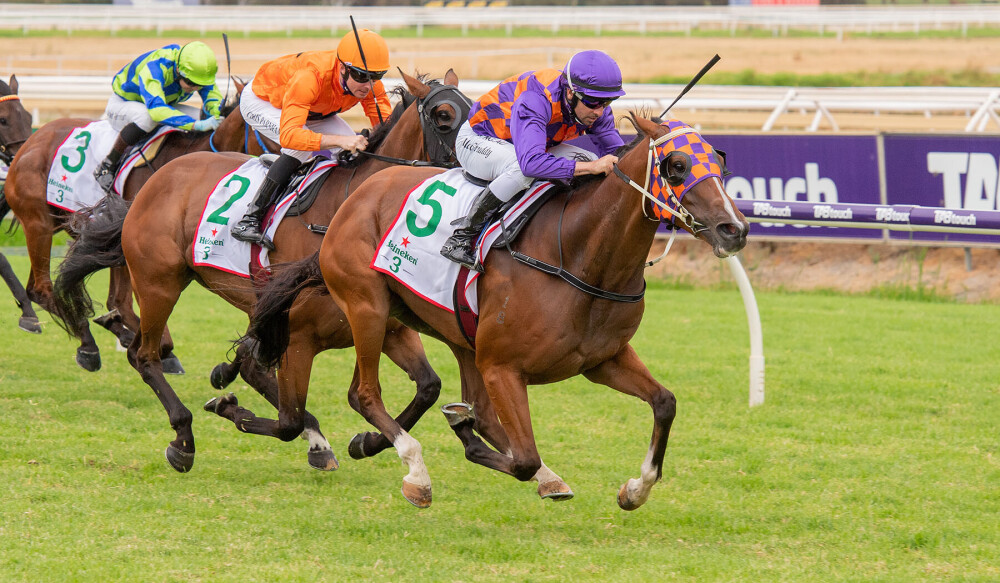 “He has natural ability and a tough constitution.  He’s eating well, putting on weight and working accordingly.  ‘Shooter’ (McGruddy) said he was happy out there and is getting better as he matures.”

Lautre (Photo: Western Racepix) had won a Pinjarra maiden over 1800m last month for Pope and stable client John Dunn who bred him from Don’t Hussle Me (Husson).  She’s a half-sister to Mr Marbellouz (LR BRC Ascot Hcp) and has foaled fillies by Vital Equine and Long Leaf in the last two years.

Another Awesome Rock 3yo with staying potential is the Grant Williams-trained gelding Romancing The Rock.

He followed a debut second over 1500m at Ascot on March 2 with a workmanlike finish when runner-up over 1400m on March 13.

Awesome Rock’s first book at Gold Front also includes star filly Searchin’ Roc’s who can dominate the fairer sex again when their grand-final comes around in the LR Sheila Gwynne Classic (1400m) at Ascot on April 30.

Searchin’ Roc’s completed a hat-trick of winter juveniles at Belmont before ramping up her record at the summer carnival in the LR Belgravia Stakes and G3 Champion Fillies.

Gold Front’s homebred filly Kaymay has her hoof on the till after a first-up second to Critical Altitude at Ascot on March 2.  She was Awesome Rock’s first winner in March 2021 and has been nominated for Ascot this Wednesday.

Eason was one of four winners for Joao Moreira in the Chester Hcp (1200m) at Happy Valley.  The Magic Man always had the improving gelding well-positioned before coming around the pacesetters for an easy two and a half lengths victory.

“He’s a nice horse,” trainer Frankie Lor said.  “He’s still only three and tonight was only his fifth start.  I think he could get ten points for this win but he should still be in Class 3, so I will keep him at Happy Valley.”

Eason graduated from the 2020 Inglis Melbourne Premier Yearling Sale for $80,000.  His dam Prete A Partir (Choisir) had a Rich Enuff colt sell for $65,000 to trainer Stephen Miller through the Gold Front draft at last month’s Perth Magic Millions.