Saturday’s final trials for the G2 Karrakatta Plate accentuated the gap between Amelia’s Jewel and her rivals for the $500,000 2YO Grand-Final on April 2.

Amelia’s Jewel (Siyouni) firmed into a $1.80 favourite for the Karrakatta after she waved good-bye to the State’s best fillies in the G3 Gimcrack Stakes (1100m).  Left The Building (Exceed And Excel) is the $7 second-elect following his win against the colts in the LR Perth Stakes (1100m).

“She’s improved out of sight fitness-wise from her first run in the (LR) Supremacy Stakes,” trainer Simon Miller told The West Australian Newspaper.  “She’s bombproof.  I didn’t really worry about the wide gate.  I told Paddy (Carberry) to just let the race unfold up front.  I knew she would be able to zap them in the straight.” 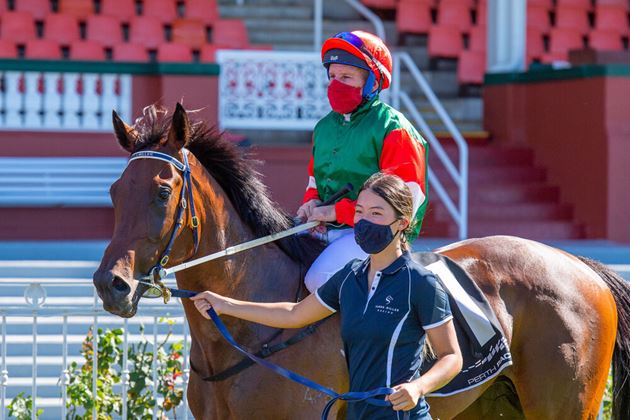 A homebred for Peter Walsh’s Amelia Park in Vasse, Amelia’s Jewel (Photo: Western Racepix) is the first foal out of Irish-bred mare Bumbasina (Canford Cliffs) and she was giving the leaders the best part of 10 lengths at the half-mile to make it two black-type wins in two starts at Ascot.

Carberry geared her down well before the line to score by more than two lengths from Costume Party (A Lot) and Penny On The Queen (Universal Ruler).

“She’s totally professional,” Miller added.  “Nothing fazes her.  She’s so responsive.  I’ve had some really good juveniles and this one is capable of measuring up interstate.”

Left The Building (Exceed And Excel) left it late to nail Street Parade (Lucky Street) in the LR Perth Stakes.

He was racing first-up off a debut third in the Crystal Slipper Stakes (1100m) last November and continued a successful season for trainer Luke Fernie with his 2yo team.  He looks a readymade replacement for former stablemate Sheeza Belter (Gold Standard) who was transferred to Snowden Racing in Sydney following an eye-catching victory in the RL Magic Millions Classic (1200m) in February.

It was also a welcome win for part-owner Kim Doak who races Gimcrack Stakes runner-up Costume Party.  “He let down like a horse that is going to need every bit of 1200m in the Karrakatta,” Fernie predicted.  “He did it on raw ability today.”

Left The Building is the 194th Stakes winner by Darley champion Exceed And Excel and he was a steal when knocked down to Doak for $130,000 from the Kitchin Hills draft at the 2021 Inglis Easter Yearling Sale.

His USA-bred dam Vicennalia (More Than Ready) was a $500,000 buy for Sheikh Mohammed at the 2014 Keeneland September yearling sale and she won a Newbury nursery on debut for Charlie Appleby in 2015.

Vicennalia is a half-sister to Saratoga Group 2 winner Speaktomeofsummer (Summer Font) and Kitchin Hills manager Mick Malone rated Left The Building highly at Riverside Stakes.  “He has the physical attributes to match that pedigree and he’s a mature colt both mentally and physically.  He looks like he will be up and running as an early two year-old with the scope to train on.”