Unbeaten colt Rokanori is on course to give his sire Awesome Rock a first-crop classic in the G2 WA Derby (2400m) next month.

Rokanori completed a winning hat-trick in the LR J C Roberts Stakes (1800m) at Ascot on Saturday for a syndicate managed by Neil Pinner.  He defeated odds-on favourite Trix Of The Trade (Trade Fair) by a neck with another length to Henchard (Blackfriars). 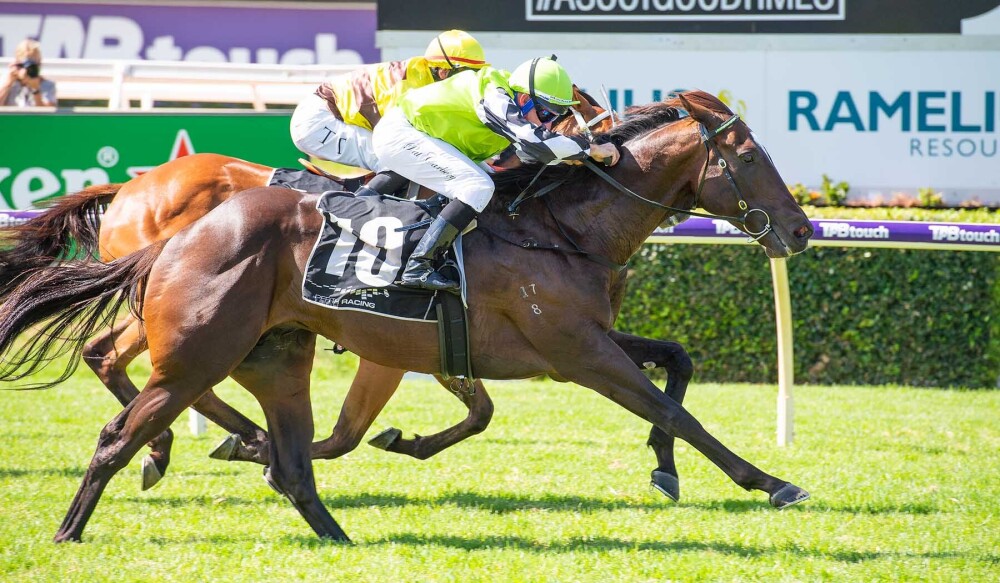 The Grant Williams-trained galloper (Photo: Western Racepix) firmed into $4.40 for the WA Derby on Saturday, April 9.  He’s on the third line of markets behind Alaskan God (Playing God) at $4 and Trix Of The Trade (Fair Trade) at $4.20.

“It’s only early and he has a lot of growing to do, so we have to take every run as it comes,” Williams said.  “He does everything you put in front of him and that gives you confidence going forward.

“He’s come through really good since that run on Saturday.  At this stage he’s handling it very well for a horse trying to reach a grand-final in his first preparation.”

Rokanori (3c Awesome Rock – Nishikawa by Fuji Kiseki) was bred and sold by Gervase Park for $165,000 at the 2020 Perth Magic Millions.  He’s a half-brother to four winners headed, until now, by Takanori (Vital Equine) who was successful in the LR WA Breeders’ Classic in 2013.

Nishikawa has a 2yo filly by Awesome Rock named Truly Awesome with Neville Parnham and the mare also has a weanling colt by I’m All The Talk.

Awesome Rock (Fastnet Rock) stood at Gold Front Thoroughbreds for a $5,000 service fee last year and that could be revised upwards following a successful Perth Magic Millions last month when his Book 1 yearlings averaged $89,857.  That was a 75% increase on his 2021 figures.

Searchin’ Roc’s opened Awesome Rock’s black-type account during Ascot’s summer carnival in the LR Belgravia Stakes and G3 Champion Fillies Stakes.  She’s back in work with trainer David Harrison for an autumn campaign that will kick-off in the $100,000 Marjorie Charleson Classic (1200m) at Ascot on Good Friday, April 15.

Gold Front homebred Acromantula also won at Ascot on Saturday.  The front-runner’s victory in the Vale Rob Harvey Hcp (1000m) was his fifth in 11 starts for earnings now approaching $250,000.

Acromantula is a 4yo son of Champion Australian sire Written Tycoon and his dam For Your Eyes Only (Bletchley Park) was a multiple Listed winner of the 2009 Gimcrack Stakes & Ascot 1000 Guineas and 2010 Beaufine Stakes.