Utgard Loki headlined a winning treble for Yarradale Stud at Pinjarra on Sunday with his first Stakes victory in the LR South West Cup (2300m). 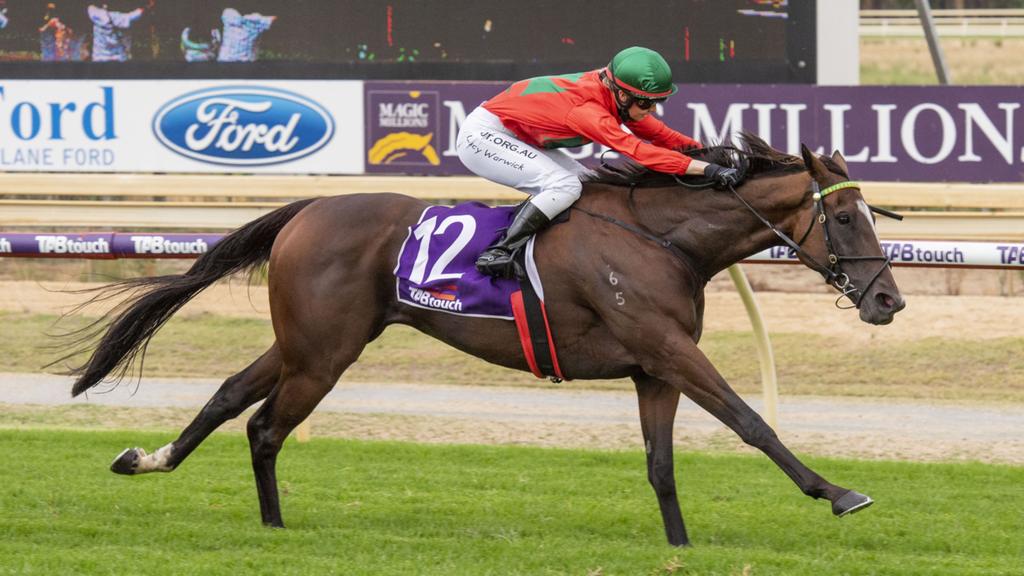 Utgard Loki (Photo: Western Racepix) is the 18th individual Stakes winner by Frost Giant (Giant’s Causeway) who shuttled to Gidgegannup in 2013 and 2014.  He was left in front a long way from home but was still strong through the line to score by over a length from stablemate True Attraction (More Than Ready).

The Adam Durrant-trained stayer was coming off an unlucky third in the LR Bunbury Cup and fully deserved the black-type breakthrough.  “He’s in good form and just keeps improving,” stable foreman Jason Miller said.  “He was travelling really well coming to the corner and was still bolting when they straightened.”

Frost Giant was put down in New York earlier this year after battling laminitis in retirement.  He’s best known out here as the sire of Valour Road who sent his bank balance to $1.44 million with a last-start victory in the G3 Scahill Stakes at Ascot.

Consistent mare Arracity (City Place) qualified for the $100,000 Sky Racing Provincial Championship Final (1200m) at Belmont on May 21 when she won Heat 5 of the series on Sunday.

Arracity is trained by Brian Kersley for Roselee Park’s Tracy Rodwell who owns her dam Arrasene (Fastnet Rock).  Three of her four wins have been at Pinjarra and she’s only finished out of the first-four once in her last nine starts there.

She was also the fifth winner by City Place in the last fortnight.  A son of Champion USA sire Storm Cat, he covered four books at Yarradale after a successful start to his stud career in Florida where he built a prodigious 82% winning strike-rate.

Champion sire War Chant (Danzig) completed the Yarradale treble with Canto De Guerra who was winning for the second time this prep at Pinjarra.  Trained at Bullsbrook by Ray Vincent, he’s a full-brother to Chantski (LR Gimcrack Stakes) who foaled a filly by Toronado (Ire) for Yarradale’s Ron Sayers and part-owner Simon York in October.

Their dam Endesa (Marauding) died last year and her final foal – a yearling filly by War Chant – has been retained by Yarradale.