Morton on the money with Buzzoom

Burgess Queen Stakes winner Buzzoom has returned to racing as good as ever in the Crown Perth Hcp (1200m) at Ascot.

The Safeguard filly relaxed behind a soft lead set by Charleton Eddie before letting down with a quick final 600m sectional (33.85s) on Saturday.  She was looking for the line without the benefit of a trial but was still too strong for Mood Swings (War Chant) and Watch Me Dance (I’m All the Talk). 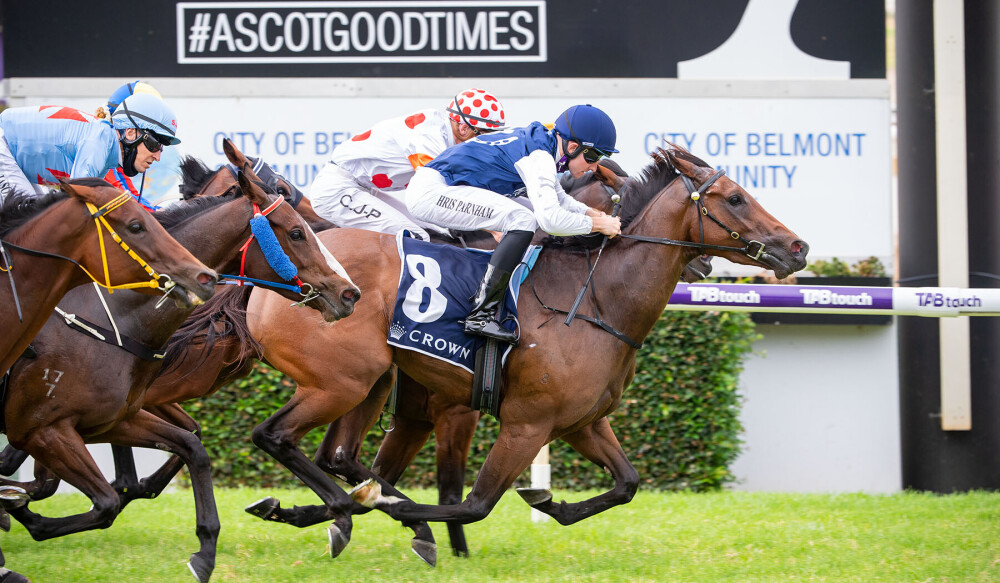 Buzzoom (Photo: Western Racepix) completed an Ascot hat-trick in the LR Burgess Queen Stakes last November and followed up with a creditable second in the G3 Champion Fillies and a never-nearer fifth in the G2 WA Guineas.

Trainer Dan Morton, who is Sydney with Kissonallforcheeks for this Saturday’s G1 Doncaster Mile, was spot on when he sensed Buzzoom didn’t require a barrier trial before racing first-up.

“Dan’s been on the phone every day and he got it right,” stable foreman Vinnie Collica said.  “He reckoned she was forward enough to go with fresh legs into this race.”

Buzzoom was solidly-backed into favouritism and her autumn targets this prep include the LR Sheila Gwynne Classic (1400m) at Ascot on April 30.  She graduated from the 2020 Perth Magic Millions for $80,000 and races for a syndicate that includes long-time stable clients Enzo Gianotti and Fred Fairthorne jnr.

Forest View Farm’s Ben Duncan bred her by using Mogumber Park stallion Safeguard (Exceed And Excel) over Xaar Boom (Xaar) who is also the dam of $300,000 earner Boomtastic (Sessions).  The mare has a yearling filly by Safeguard and a weanling colt by Sessions.

Packing Award (Shamus Award) charged down the outside to land the Class 3 Sam Chuk Hcp (1650m) at Happy Valley under Karis Teeton.  It was his third win in only eight starts for owner Edmond Lee Man and trainer Peter Ho.  Mogumber Park sold him as a yearling for $52,000 at the 2019 Perth Magic Millions and his value escalated to $550,000 later that year at the NZB Ready to Run 2YO Sale.

His dam Exchanges (Domesday) was a $72,500 buy for Mogumber Park at the 2014 Magic Millions National Broodmare Sale.  She had won at Sandown Hillside for Sheikh Mohammed and earned black-type when runner-up in the 2011 Tasmanian Oaks.