Lady Chant broke her maiden in the G3 WA Oaks (2400m) at Ascot on Saturday but the classic win was no fluke according to trainer Brock Lewthwaite.

The daughter of Yarradale Stud champion War Chant (USA) had been placed in three of her four starts and stepping up in distance made all the difference at the business end of 2400m.  Settling last for replacement rider Jason Whiting, the $15 outsider split runners with a late sprint to defeat Feels Danish (Danehill Express) and Constant Dreaming (Blackfriars).

“This race has been the plan since she was a yearling,” Lewthwaite revealed.  “She didn’t show a lot early but her older siblings all came on as older stayers.  She fitted that mould and I was confident when I saw her weaving through the field.” 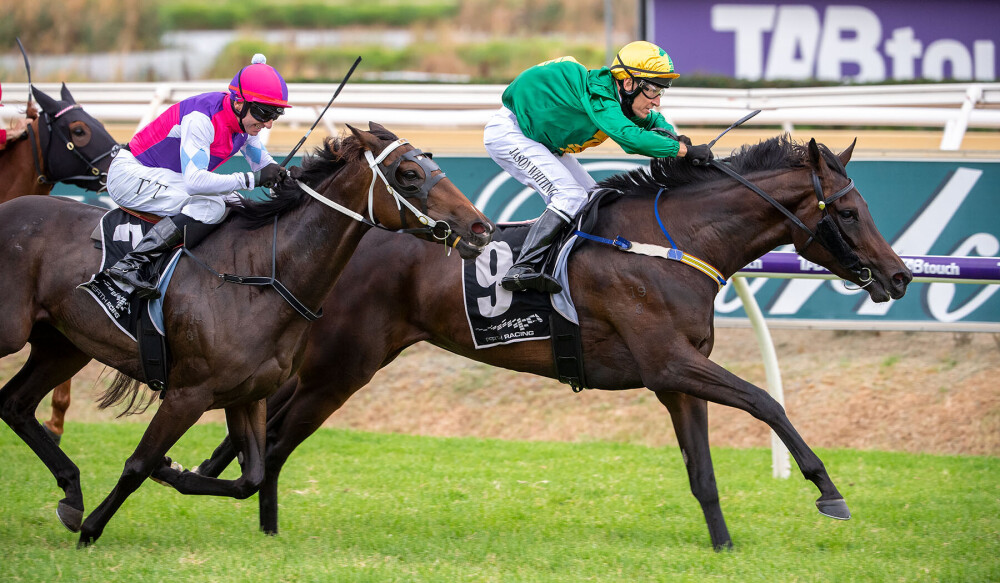 She was purchased by Singapore-based Constance Cheng who has enjoyed a lot of success with the Gidgegannup farm over the years racing winners like Bandido, War Citi, Silent Boss, Image Keeper and Seeable.

Yarradale owner Ron Sayers kept a share to keep faith with a family that has served him so well since purchasing her dam through Belmont Bloodstock’s Damon Gabbedy at a Darley Reduction Sale in 2010.

Although unraced, Verse was a half-sister to Group 1 winner Anthems and a $30,000 price-tag turned out to be a bargain a year later when her son Lamasery (Commands) commenced a Stakes-winning career in Sydney and Melbourne.

Lady Chant (Photo: Western Racepix) is her fourth winner out of four to the races from Yarradale following Spun Dry (Hard Spun), Platinum Power (Commands) and Busker’s Ballad (Street Cry) who stayed on strongly over 2250m at Morphettville last month.

“I was relieved Verse finally had another filly because she wasn’t getting any younger,” Yarradale manager Bernie Hamill recalled.  “Lady Chant was a correct, scopey yearling with a great nature and had a lot of supporters in the sale-ring.

“Verse looks tremendous but we only serve her every second year now.  With her lovely nature and love of foals, there will be a new career for her as a nanny when she’s pensioned

“Her latest foal by Playing God is another tall, elegant filly that has thrown to her sire but there’s a lot of the mare coming through.”

The WA Oaks was staged on the fifth anniversary of War Chant’s first Australian Group 1 with Silent Sedition in the 2017 William Reid Stakes at Moonee Valley.  And Saturday’s result was the 45th Stakes winner world-wide for the 25-year-old son of Danzig.

“War Chant is going well and we will limit his book to about 30 again this year,” Hamill reported.  “He’s still active and happy in himself and had some cracking foals born in 2021.”

Among them are colts from Edition (half-sister to Malibu Style) and Diamonds N Dreams (dam of War Gem) and fillies out of First Game (dam of Neurological) and Bonny Belle (family of Kalatiara & Arcadia Queen).

Lewthwaite, 30, grew up in Wanganui in New Zealand where his father Bill was a trainer, in-flight equine groom as well as working at Woodlands Stud in Papakura.  And he’s been the biggest influence on his son’s career in thoroughbreds.

Brock also lived in the fast lane as a horse wrangler on the set of the multi-billion-dollar film trilogy The Hobbit.  “They were looking for tall, skinny horse riders and I only expected a week’s work,” Lewthwaite recalled.  “But I ended up there for more than two years.”

After holidaying around Europe and Australia, his final stop was Perth and he hasn’t looked back training out of Serpentine in the heart of WA stud country.  “We have a good team and I have to thank Nadine, Alicia, Eliza, Sarah and Jess, obviously my father Bill as well as Constance and Yarradale.

“Lady Chant didn’t have her first start until December and she has come a long way in such a short time.  Now we will go to the WA Derby.”

The War Chant filly is on the third-line of TAB markets at $9 for the G2 WA Derby (2400m) at Ascot on April 9.  She will be in good company beating the boys – Bob and Sandra Peters have done four times in the last decade with Dreamaway, Delicacy, Arcadia Dream and Tuscan Queen.