The dust has only just settled on Amelia’s Jewel’s awesome victory in Saturday’s G2 Karrakatta Plate (1200m) and Amelia Park owner Peter Walsh is already keyed up for another significant milestone in Sydney on Tuesday.

Walsh has catalogued a So You Think – Bound Copy colt through Segenhoe Stud for the Inglis Easter Yearling Sale that starts at Riverside Stables tomorrow.  He descends from Australian Horse of the Year Bounding Away (Biscay).

The So You Think colt is one of four Westspeed Platinum eligible yearlings entered by WA breeders through Hunter Valley vendors for Australia’s premier sale of yearlings.  The brown colt is catalogued as Lot 80 and the others are from Mark Chadwick (187), Yarradale Stud (279) and Darling View Thoroughbreds (476).

Amelia’s Jewel (2f Siyouni – Bumbasina by Canford Cliffs) proved she’s up to matching it with the best fillies of her generation in the wake of an unbeaten black-type treble comprising the LR Supremacy Stakes, G3 Gimcrack Stakes and G2 Karrakatta. 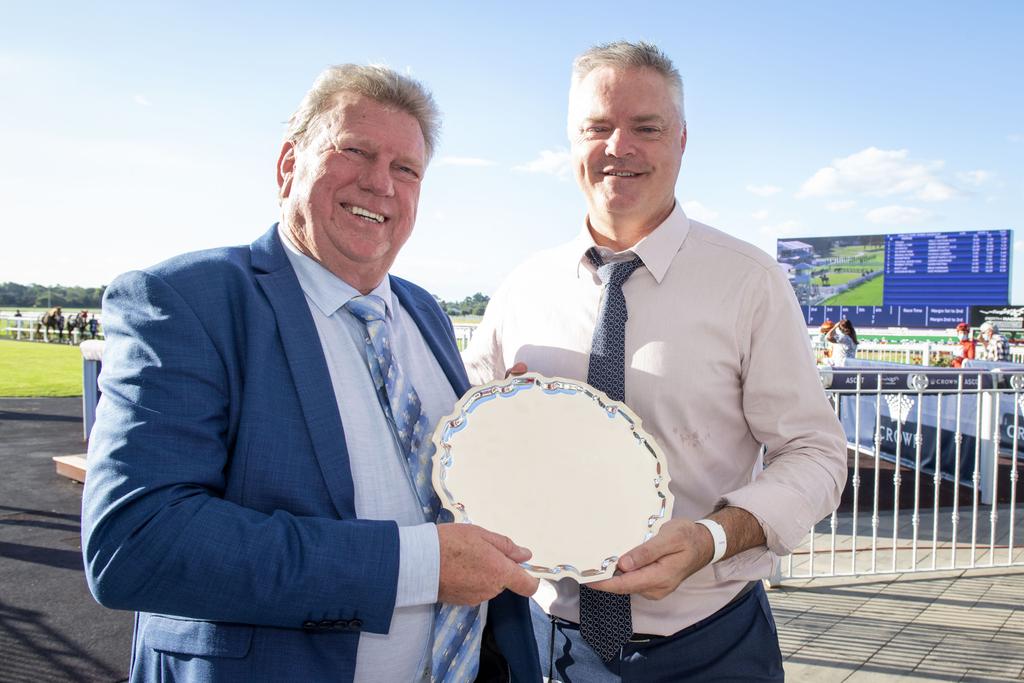 Nevertheless, Walsh and trainer Simon Miller (Photo: Western Racepix) are in no hurry to travel to Melbourne or Sydney.  She will likely target the G3 WA Champion Fillies Stakes (1600m) and G2 WA Guineas (1600m) later this year prior to a move east for the autumn carnivals in twelve months.

Walsh was lost for words after watching his filly power home to win as she liked from Baby Paris (Playing God) and Penny On The Queen (Universal Ruler).

“I’ve had some good horses in my time, but she’s special,” he said amid emotional scenes as Pat Carbery brought the winner back to scale at Ascot.  “And my youngest daughter Jessie is her strapper so that really made me a bit teary.”

The Amelia’s Jewel story has been well-documented.  Walsh and his wife Annie bought her Irish-bred dam Bumbasina for 75,000gns (AUD 140,000) at the 2018 Tattersalls July Bloodstock Sale and then sent her to Haras de Bonneval in Normandy where she was covered by Siyouni (Fr) to southern-hemisphere time.

Simon Miller was winning the Karrakatta for a fourth time but he also admitted succumbing to the occasion.  “I’m a wreck,” he confessed.  “I knew from the first morning she galloped we had something special.  She’s a freak.

“I’ve bought my previous Karrakatta winners as a foals or yearlings but this one just landed on my doorstep.  Walshie is a gentleman to train for and it’s great to win the race he sponsors.”

Miller had won the Karrakatta previously with Whispering Brook, Night War and Valour Road who beat Amelia Park filly Lady Cosmology in 2018.  “After Valour Road won, I walked into the yard and said ‘sorry mate’ to Walshie.  But he told me not to apologise.”

Miller combined with Carbery when Night War scored in 2011 and the experienced hoop wasn’t fazed riding the odds-on favourite from an outside barrier in the $500,000 feature race.  “Simon didn’t give me any instructions.  The pattern wasn’t suiting back-markers but she’s a Ferrari and we always had them covered.”

The Karrakatta prizemoney sent Amelia’s Jewel’s bank-balance to $447,050 and there will be another lucrative result on Tuesday if Walsh can bring himself to part with the So You Think colt at the Sydney Easter Sale.