Mt Hallowell Stud owner Craig Thompson launched the career of another exciting prospect when his Snitzel colt Colossal was an eye-catching winner at Pinjarra on Wednesday.

Colossal accelerated through a gap to nail the Great Northern Supercrisp Maiden (1200m) as a short-priced favourite on debut.  Carrying Mt Hallowell’s Gold & Purple silks, he settled behind a moderate tempo and had the field covered in a couple of strides when Paddy Carbery clicked up at the furlong.

In the last twelve months, Thompson has been blessed breeding 2yo feature winners Hoi An (G3 WA Sires’ Produce Stakes) and Sheeza Belter (RL Magic Millions Classic).  Both fillies were readymade but feet issues kept Colossal on ice until he was an autumn 3yo.

“It was a great result after waiting so long,” Thompson said.  “And it was especially pleasing to see him take that tight run for Paddy at the right time.” 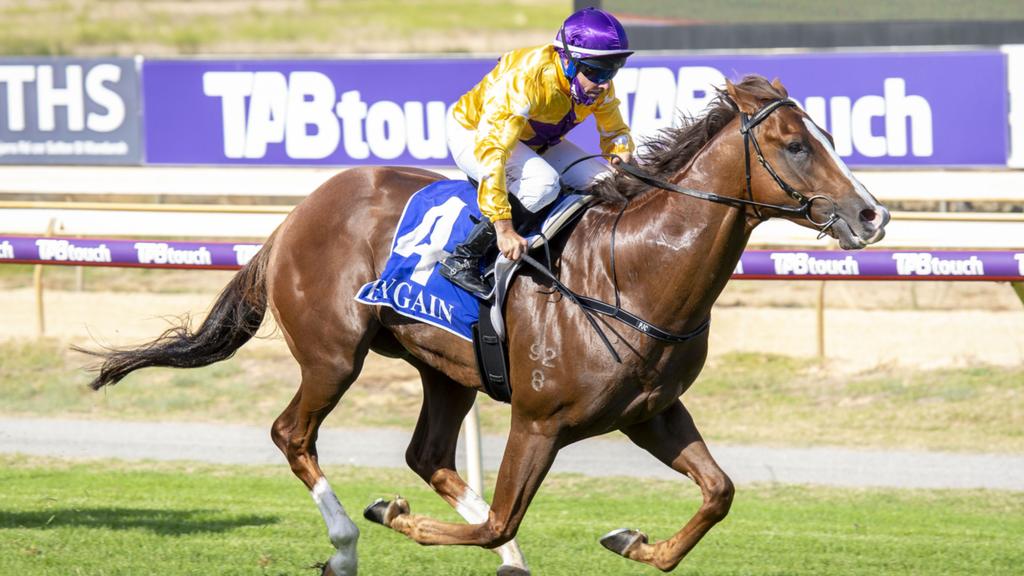 Colossal (Photo: Western Racepix) is prepared by Group 1 trainer Grant Williams and is bred in the purple by four-time Australian Champion Sire Snitzel from Hallowell Belle (Starcraft) who won the G2 Gilgai Stakes (1200m) at Flemington and LR Darby Munro Stakes (1200m) at Rosehill in 2012.

Trained by Gai Waterhouse, she bowed out after an unplaced finish behind Barakey in that year’s G1 Winterbottom Stakes (1200m) at Ascot.

“They put Colossal through the Vinery consignment at the 2020 Inglis Easter Sale and I instructed Gai and Adrian (Bott) to buy him on my behalf as I couldn’t get across to Sydney.

The trio had to be patient because Colossal had a condition known as ‘long toe – short heel’ syndrome which can lead to more serious leg ailments if not corrected.  “I decided that it would be better to take him along very slowly rather than through the rigours of a busy stable,” Thompson continued.  “I transferred him here to WA and put him in a paddock for a year.

“With help from the excellent vets and farriers at Murdoch Equine Hospital, his feet are now in good shape.  He’s a lovely animal and it was a terrific debut.”