All Americans star in Avon Valley

All American dominated Northam’s mammoth program on Thursday with a winning treble and the trio were all from his first-crop conceived at Geisel Park.

He topped and tailed the card with Steak Night (Race 1) and Westriver Miracle (Race 11) and in between added a middle-leg courtesy of American Queen (Race 9).

They boosted All American’s first-crop numbers to 24 individual winners of 51 races for prizemoney over $2.1 million. 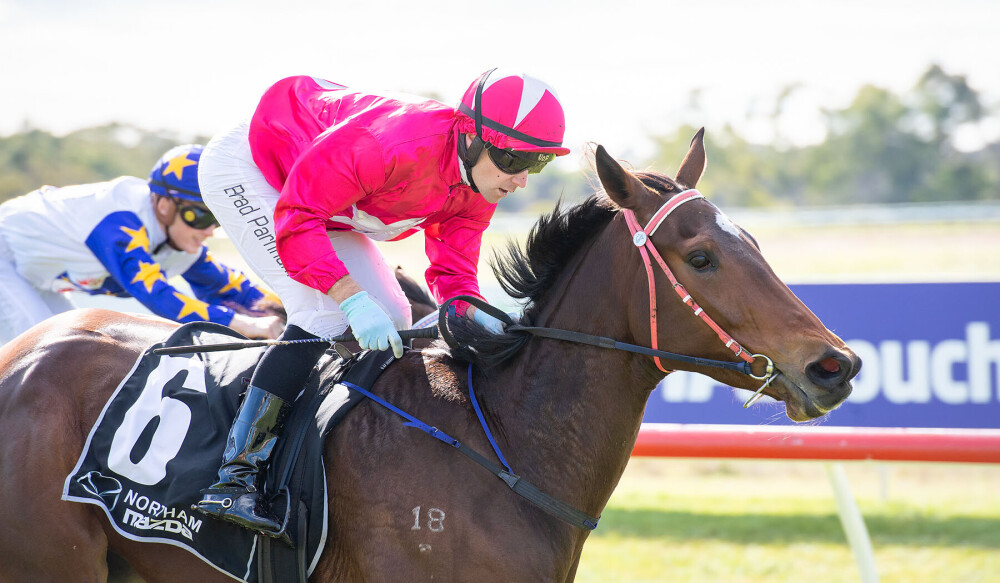 Steak Night (Photo / Western Racepix) appreciated the quick sectionals set by Murchison Falls in the Northam Mazda Maiden (2200m).  She was 10 lengths in arrears at the tail of the field before chiming in at the furlong to lead home an All American quinella from Tiger Move.

Originally with Bernie Miller, Steak Night had been placed at her previous two starts in the Avon Valley.  “She’s such a lovely girl to work with at home,” new trainer Jade Tangaroa noted.  “She had run on well from back in the field last time and is starting to put it all together.

“It was great timing from Brad (Parnham) to get the job done today.”

Steak Night (4m All American – Chokumo by Shaft) is raced by a syndicate managed by her breeder Peter Gurney.  She’s the penultimate foal of a Pinjarra winner whose first, second and third dams were all unraced.

Chokumo’s final foal is an unraced 2yo filly named Stormy Dash (Vert De Grece).  Retained by Gurney and placed with Tiarnna Robertson, she ran second and fourth in Belmont trials during April.