Trainer Fred Kersley and his wife Judy are off to a successful start this season with the assistance of Mogumber Park sires Safeguard and Rommel.

Their Safeguard homebred Marchamley is on a hat-trick over a mile after a front-running victory in the PRC Membership (1600m) at Belmont last Saturday.  The 4yo gelding was coming off a 37-day break following a Northam maiden win in June.

“He missed a run with those lost meetings but did a good job today,” Kersley said.  “He set his own pace and that pattern help him hit the line.” 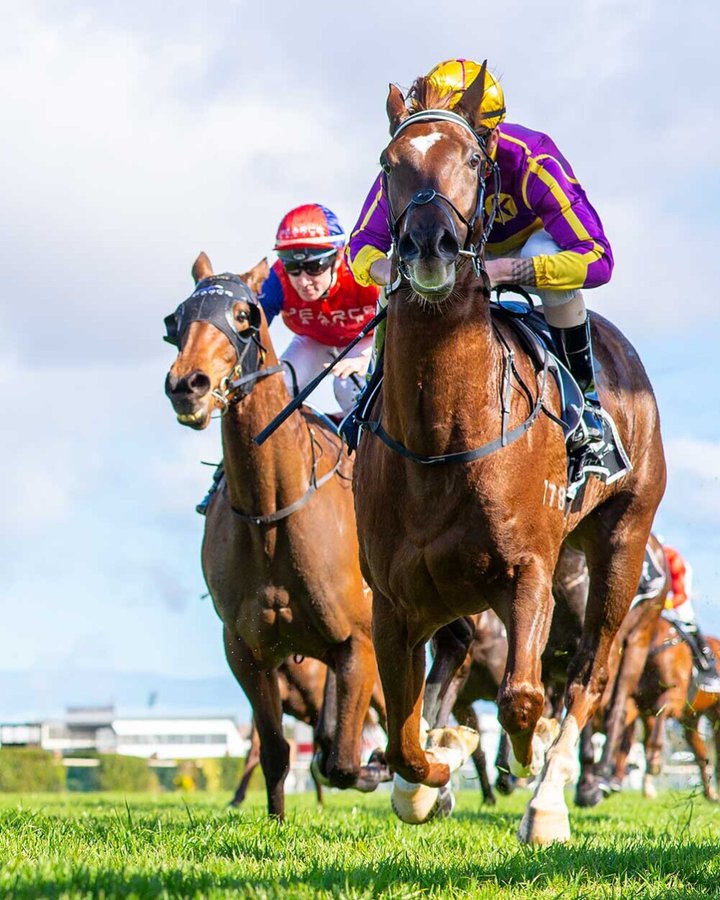 Marchamley (Photo / Western Racepix) was ridden by replacement jockey Joe Azzopardi who stood in for Jade McNaught.  “He won it in the first two furlongs,” Azzopardi said after tipping the scales at 60kg.  “He’s a hot horse but found the front easily and we were able to get some cheap sectionals before quickening on the corner.”

His dam Marriwood (Fath) is a half-sister to Blackwood (Blackfriars) who won a LR Burgess Queen Stakes for Kersley and Oakland Park.  They’re from the extended family of WA icon Northerly who was prepared by the Hall Of Fame trainer for Oakland’s Park’s Neville & Susan Duncan.

The Kersley’s 4yo Rommel mare Hart Trader took a while to break through but did it in style at Pinjarra last Thursday.  Although not sighted at her previous start in the Avon Valley, she was specked from $15 into $10 before swamping her rivals in the Electrical Consultancy Maiden (1400m).

Hart Trader began making ground for Beau Banovic-Edwards after spotting the speed 8 lengths passing the half-mile marker.  Letting down at the top of the straight, she produced a powerful finish to win running away by three lengths!

There had been signs of potential last season when Hart Trader was runner-up at Ascot and at Pinjarra when stretching out to 1600m.  She joined Marchamley at Kersley’s Ascot stable after failing to reach a $20,000 reserve at the 2020 Perth Magic Millions Yearling Sale.

Her dam Hart To Trade (Hartley’s Spirit) is a half-sister to LR Belmont Guineas winner Tradesman (Trade Fair) and she has an unraced 3yo Rommel filly named Hart Of Rome with Chris Stelmach at Bunbury.

Safeguard (Exceed And Excel) and Rommel (Commands) were Champion First-Season sires in WA and they have both gone right on with the job at Mogumber Park in Bullsbrook.  Rommel will stand for $7,700 this season and Safeguard $4,400.  Both fees (inc GST).