Talented Snippetson mare Vane Tempest will be set for a Summer Stakes campaign after completing a treble for Scenic Lodge at Belmont on Saturday.

Vane Tempest is a homebred for Scenic Lodge founder David Smith and she signalled black-type is within reach winning the Furphy Hcp (1300m).  Given the run of the race by Clint Johnston-Porter, she burst through a gap between Weaponson and Hibiscus Lady to score by over a length.

Takahide Ikenushi celebrated his first success as a trainer with the 5yo mare and it was the third win on the day for Scenic stallions following Trevern (Snippetson) and Noble Born (Blackfriars). 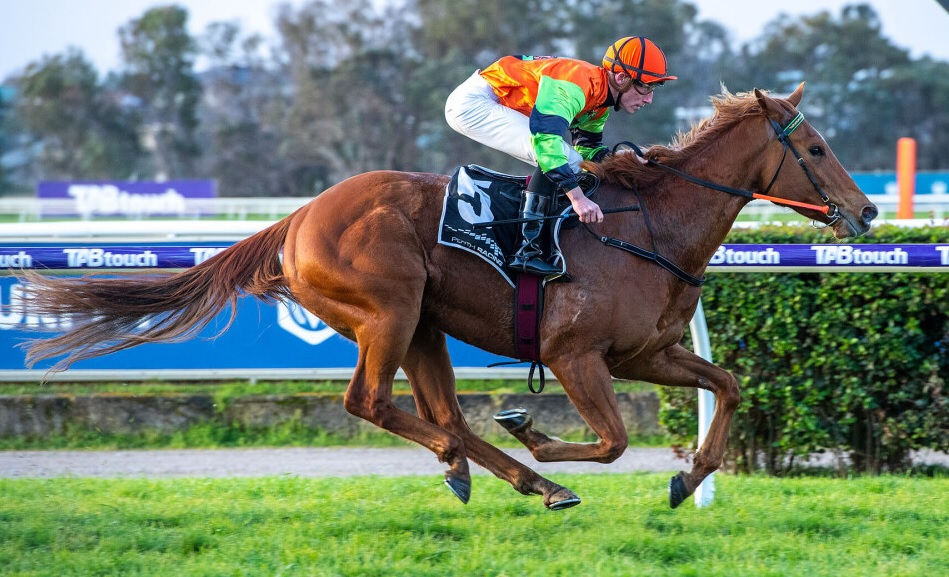 “We will give her one more start and then come back for the Jungle Mist Classic (LR, 1200m) and Jungle Dawn Classic (LR, 1400m),” Ikenushi said.  “Our aim will be getting some black-type for Scenic Lodge.”

Vane Tempest (Photo: Western Racepix) can be a handful so racing for third time in as many weeks helped her settle according the Johnston-Porter.  “I told ‘Ike’ once she drew a barrier she would win.  She travelled beautifully and then exploded in the straight.”

Vane Tempest was the result of Quantum Leap’s only successful cover in WA, however, she has turned out to be a productive purchase for Scenic Lodge.  And that price-tag will look an even bigger bargain if Vane Tempest appears in future catalogues with a black-type update on her page.

The winning run of WA owner-breeder Vicki Cayley continued on Saturday when Noble Born led home a quinella for Scenic Lodge legend Blackfriars in the TABtouch Westspeed Platinum Hcp (1600m).  The 4yo mare strolled home by five lengths from Ghobella.

Lightly-raced Noble Born had been placed behind Buzzoom as a spring 3yo at Ascot and broke her maiden at Pinjarra in June.  She is a direct descendant of Beau Sovereign blue-hen Born Rich.