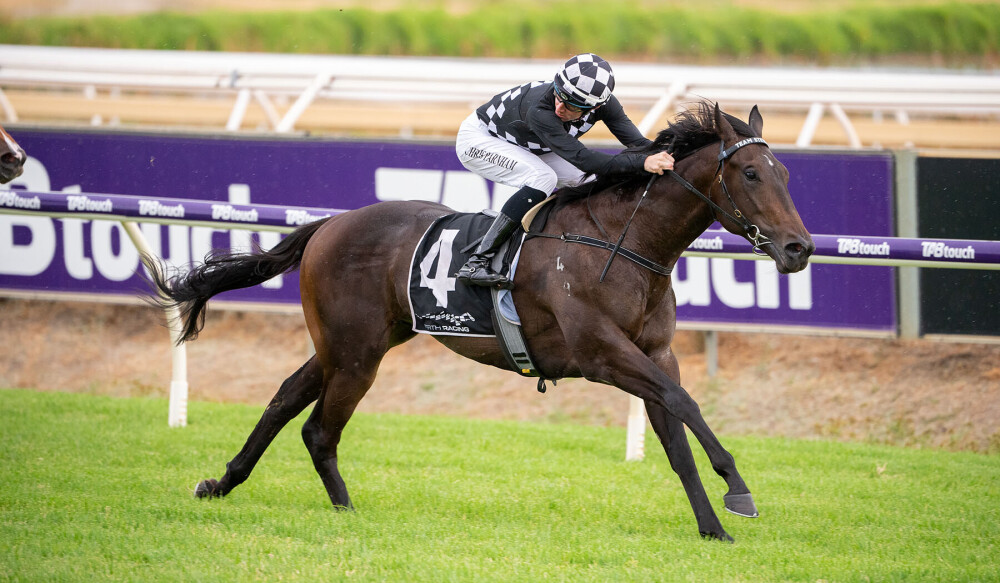 Swear To God (Photo / Western Racepix) did best of the rest behind runaway Belmont winner All Show on Saturday and Street Parade was also placed first-up when beaten less than a length in the Privé Fashion Platform Hcp.

They were both resuming after winter spells with Penelope Oates at Copperpenny Park in Hopeland.

“The 1000 metres was probably too short for Swear To God,” Stewart said  “He ran well but will be better suited up in distance.

“He’s the spitting image of Playing God and I think he’s got a future.”

Swear To God (3c Playing God – Ora Miss by Oratorio) won twice in three starts at Ascot in the autumn for a syndicate managed by Stewart’s wife Antonella.  His only loss was a placing behind Snowdome and All Show in April.

The Stewarts bred him and received several offers from Eastern States stables including one from clients of Chris Waller but they were rejected.  “We might look at going over east with him next year,” Stewart said.  “Brisbane might even be an option for the winter carnival.”

Their Matheson Road stables in Ascot also house a Playing God 2yo full-brother to Swear To God that was bred in partnership with Queenslea Park owners Alan & Helen Morton.

He’s known as Moses at home but has been registered as Stylish Lord.  That will resonate with racegoers who remember a galloper by that name winning 14 in a row back in the 1980s for trainer Alan McNamara and owner Les Andrews.

Street Parade had won a Belmont trial before his first-up placing on Saturday and Stewart believes, if anything, he’s kept improving since a juvenile campaign that numbered six starts between November and April.

He won on debut at Ascot and followed up with placings in the RL Magic Millions 2YO Classic at Pinjarra and LR Perth Stakes at Ascot.  “He’s a chilled out character but he went bang the first morning I gave him a squeeze at trackwork,” Stewart recalled.  “I went back home and told Antonella this one goes alright.”

Street Parade (3g Lucky Street – Foo Foo The Snoo by Starcraft) was bred by Darling View’s Clive Atwell and cost $40,000 from the Western Breeders Alliance draft at the 2021 Perth Magic Millions.  His dam was an Ascot and Belmont winner and she has a yearling filly by Playing God.