Dream three-peat for Yarradale at Belmont

Yarradale Stud sires War Chant (USA) and Gingerbread Man combined for a Belmont brace on Saturday and they went one better with a treble on Wednesday.

She was given the benefit of a patient ride from Paul Harvey while the other jockeys were hellbent on getting the lead.  “They went silly in front and it was set up for something to sit back and sprint home.” Fernie said.  “She can be a handful but conducted herself today and got the job done.” 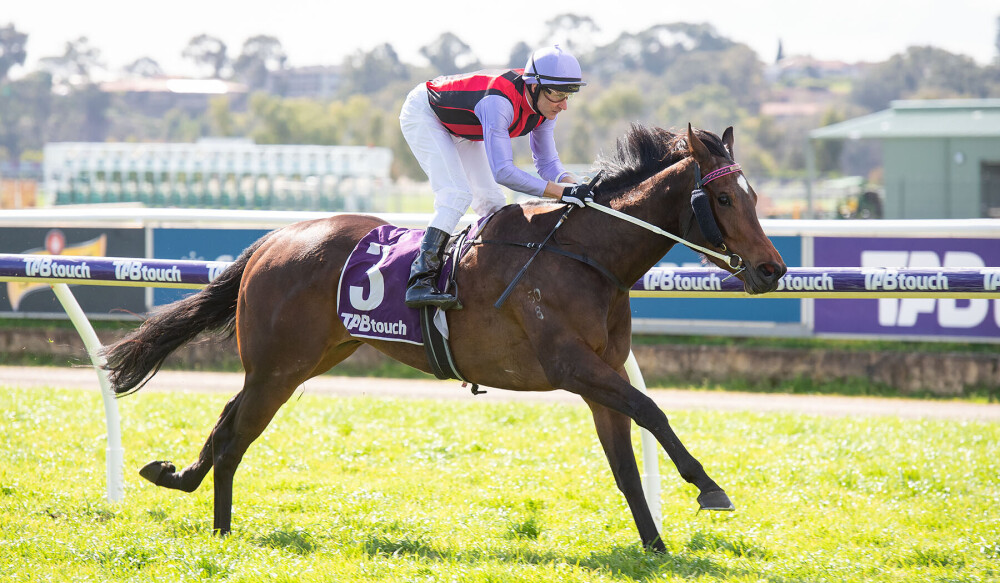 Here’s Dreaming (Photo / Western Racepix) is the first and only foal from a Amongstgoodcompany (Encosta De Lago).  It’s a Peters Investments family with second-dam Lady Belvedere (Royal Academy) a Listed winner of the 2001 Colonel Reeves Stakes and Sheila Gwynne Classic.   She is a half-sister to G1 Kingston Town Classic winner Old Nick.

Another lightly-raced 4yo mare, she was winning for the first time for a syndicate that includes Judith Kersley, Tony Patrizi and Yarradale Stud.

“She’s been knocking on the door and looking for more ground and I was confident she had the ability to run out the distance today,” Kersley said.  “It’s great to win for Tony.  He raced lots of horses with Ron Sayers and he was just telling me it’s one of the first wins since Ron’s been gone.  It brings back some wonderful memories.”

Arrow Song is a full-sister to Apache Pass who has won three races to date at Sha Tin for trainer Paul O’Sullivan  He was placed in a LR Lex Piper Stakes (1600m) at Ascot before transferring to Hong Kong in May 2020.

Arrow Song took advantage of the cutaway and so did Gingerbread Man mare Keeper Sweet in the Heineken 3 Hcp (1400m).  “She was only a beaten a length first-up last month and that gave us some confidence,” trainer Jeremy Easthope revealed.  “She was ordinary away today but the good tempo helped her stalk the speed and then sprint past them in the straight.”

Keeper Sweet is a half-sister to winners by Stratum and Sebring and their dam Keeper Quiet (Scandal Keeper) has a yearling filly by Playing God.