General Grant rallies for Goldfields Round

All American’s consistent miler Westriver Miracle wasn’t nominated for the Coolgardie Cup (1760m) last Sunday but the Geisel Park sire can still play a hand during the Goldfields Round with General Grant.

Trainer Stephen Miller confirmed General Grant will tackle the Boulder Cup (2100m) and Kalgoorlie Cup (2200m) after a tenacious victory in the TABtouch Hcp (2100m) at Belmont on Saturday. 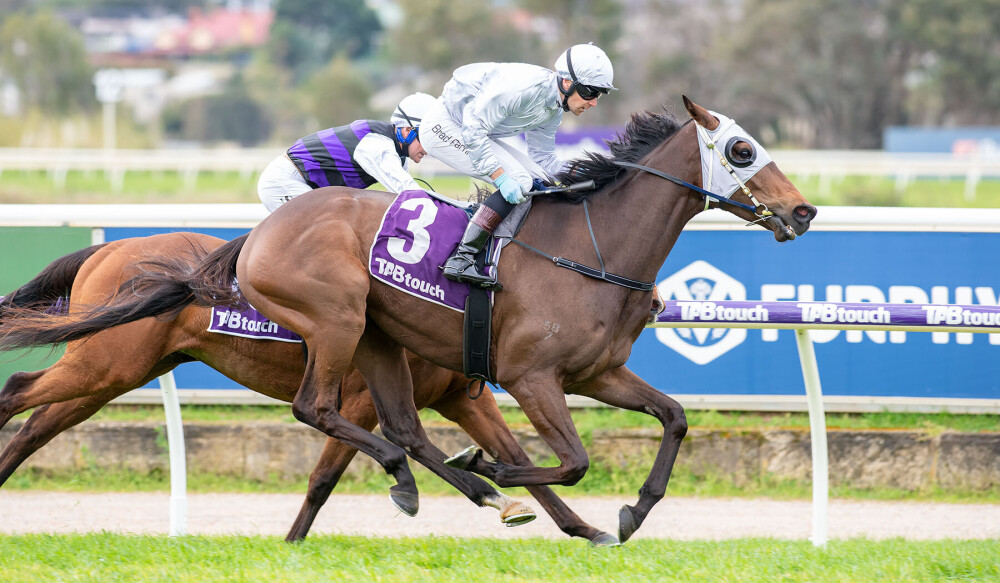 General Grant (Photo / Western Racepix) ranged up to front-runner Axel ‘R’ Eight in the straight to score by a neck after receiving the run of the race under Brad Parnham.  “He can stay and can really rally once he gets travelling,” Miller said.  “Brad knows the horse and it was a gem of a ride today.

“He did really well first-up at Pinjarra last month carrying 62kg on a Soft 7 and this run will do him the world of good.  I think he can measure up in Kal as long as he handles the track.”

The LR Boulder Cup will be run on September 18 and LR Kalgoorlie Cup on October 1.  The final two-legs of the Goldfields treble are worth a combined $275,000.

“I wasn’t afraid to get off the fence and get moving before the corner,” Parnham explained.  “S.J. has put plenty of work into him and was happy with his fitness-levels.”

General Grant has won 6 times in 17 starts and Westspeed bonuses of $82,550 have increased his overall earnings to $277,125.  All American sired him from Soldier’s Smile (Soldier’s Tale) who has a staying pedigree that features Group 1 classic winners Leica Smile (AJC Australian Oaks) and Leica Lover (WATC Derby).

He was bred by Jade Fletcher and is raced by Horseshoe Investments owner Rod Russell who has won numerous feature races but none bigger than the 1995 Melbourne Cup with Doriemus.

Meanwhile, Westriver Miracle has remained at Pearce Racing’s Karnup stables and will be gunning for a fourth win from his last six starts at Belmont in the Schweppes Hcp (1600m) this Saturday.