Playing God appears to have another black-type player in the making after Advanced put his rivals away on Saturday.

Advanced is a younger full-brother of Group 1 galloper Platoon and he’s also going in the right direction for Peters Investments and trainer Michael Grantham.  He had won twice at Northam last season before a city breakthrough in the Free Entry To Belmont Hcp (1400m).

Settling midfield for Chris Parnham, he tracked All In Red into the straight and then accelerated to score by a couple of lengths from Green And Shady (Vert De Grece) and Holy Ghost (God Has Spoken). 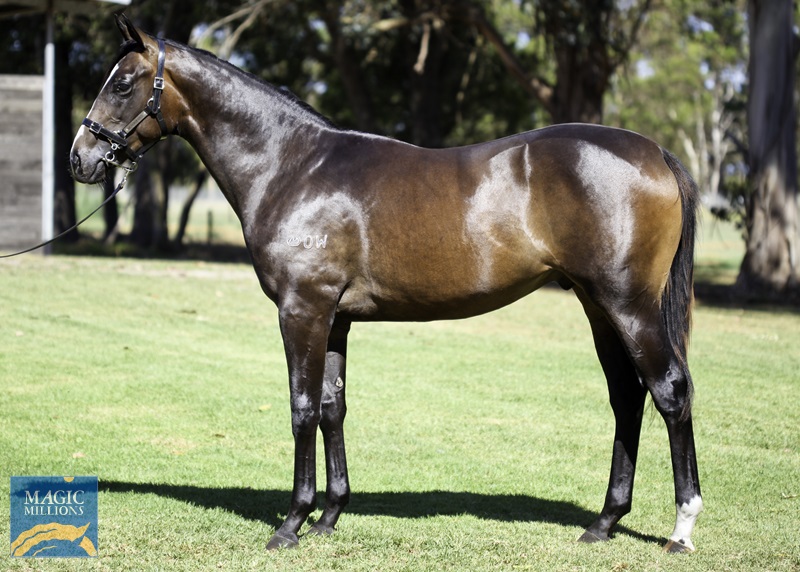 Advanced (4g Playing God – Oriel by Oratorio) was a $150,000 buy for John Chalmers Bloodstock on behalf of Peters Investments at the 2020 Perth Magic Millions.

“He looked a nice horse at the yearling sale (pictured) and his brother had been going very well,” Bob Peters said at Belmont.  “I told Chris not to go too soon because he was left in front way too soon at his last start and got run over.  I was also a bit worried he was going in underdone.  He looked ‘pretty’ but none of that mattered today.  He’s coming along and the give in the track helped, too”

Peters Investments also bought his Playing God 2yo full-brother for $55,000 at the Magic Millions Winter Sale in June.  He has been named Cantilever.

The Playing God – Oratorio cross has been a successful nick with 18 individual winners at a 72% strike-rate headed by Platoon and Ex Sport Man (G2 Karrakatta Plate).