Winner of the Week – Just Go 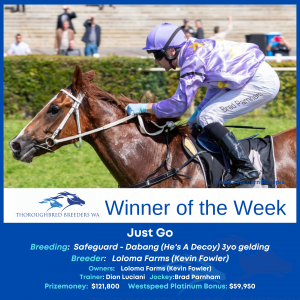 Just Go was just too fast for his rivals over 1000m at Belmont on Saturday after a midweek win over the same minimum trip last month.

The Safeguard 3yo jumped straight to the front in the Tony Marraffa Plate and ran them ragged to inflict the first defeat on short-priced favourite Tiffany Street (Street Boss).

“I came out pretty neutral because I didn’t want him to go too quickly,” jockey Brad Parnham said.  “He fired up anyway and was very strong early on.  He always felt like the winner although I knew there were some good ones behind us that would challenge late.

“He’s still learning but was good enough to hold them off.”

Just Go is a flashy chestnut with a white-striped head, four white legs and speed to burn.  He’s trained by Dion Luciani for Loloma Farms owner Kevin Fowler who raced his dam Dabang to three wins at Ascot.  She has a 2yo gelding named Bolta (Sessions) and was covered by All American last year.

Stable foreman Ian Glading tipped a bright future for Just Go.  “He was pretty impressive winning first-up and never looked like being run down today.  His only loss was at Ascot back in March when he pulled up sore so there were excuses.

“Dion can get them to jump and run and no-one works any harder.  We have 85 in work including our next 2yo crop that begin trialling this week.”

Safeguard (Exceed And Exceed) stands at Mogumber Park in Bullsbrook and Just Go is his chief earner this season after banking a second prizemoney and Westspeed bonus cheque on Saturday.