Lynward Park homebred Queen Alina charged home to land the first-leg of a winning treble for Pearce Racing at Northam on Thursday.

Facing the starter for just the third time with Joe Azzopardi steering, the lightly-raced daughter of Lynward Park sire Mahuta came from last to lead home a stable quinella by a half-length from Anna’s Boy (Sessions) in The Races WA Maiden (1300m). 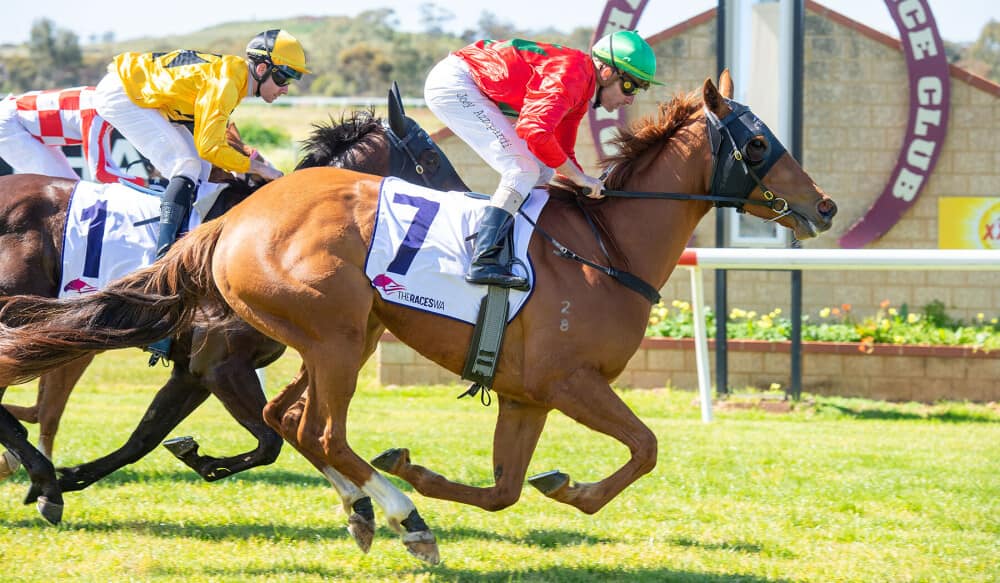 “Queen Alina (Photo / Western Racepix) has taken time to mature but put the writing on the wall first-up a fortnight ago when finishing a nose second to Do It Right at Pinjarra,” Pearce Racing reported.  “She gives the impressive she will relish stepping out to a mile in the future.”

Trainers Dan and Ben Pearce filled out the Avon Valley treble with Does He Know (Demerit) and Cosmopolitan Girl (Safeguard) to notch the stable’s 250th win since the Pearce Racing partnership formed five years ago.

Queen Alina was retained by Lynward Park after bidding stopped short of a $70,000 reserve at the 2020 Perth Magic Millions.

Her dam High Aims (Southern Image) won three races at Sandown’s Hillside and Lakeside circuits as well as a Tatura Cup for trainer David Brideoake.  She’s a half-sister to the dam of LR MVRC Alexandra Stakes winner Torah (Spinning World) and changed hands off the track for $85,000 at the 2015 Inglis Australian Broodmare Sale.

“High Aims has a cracking Bondi colt at foot and she will visit Mahuta again this season,” Lynward Park’s Troy van Heemst said on Friday.  “We sold her full-sister Highway Award to Paula Wagg for $80,000 at last year’s Perth Magic Millions.”