Tiger on the Move for McCallum

Tiger Move took 23 starts to break his duck in the Afgri Equipment Maiden (2220m) at Northam last Thursday.  It was a long time coming and there were 9 placings along the way but the Gnangara trainer never lost faith in the late-developing son of All American who stands at Geisel Park

Lo and behold, Tiger Move (Photo / Western Racepix) buttered up off a six-day turnaround for a convincing win in the Peninsula Dining Room Hcp (2200m) at Belmont on Wednesday. 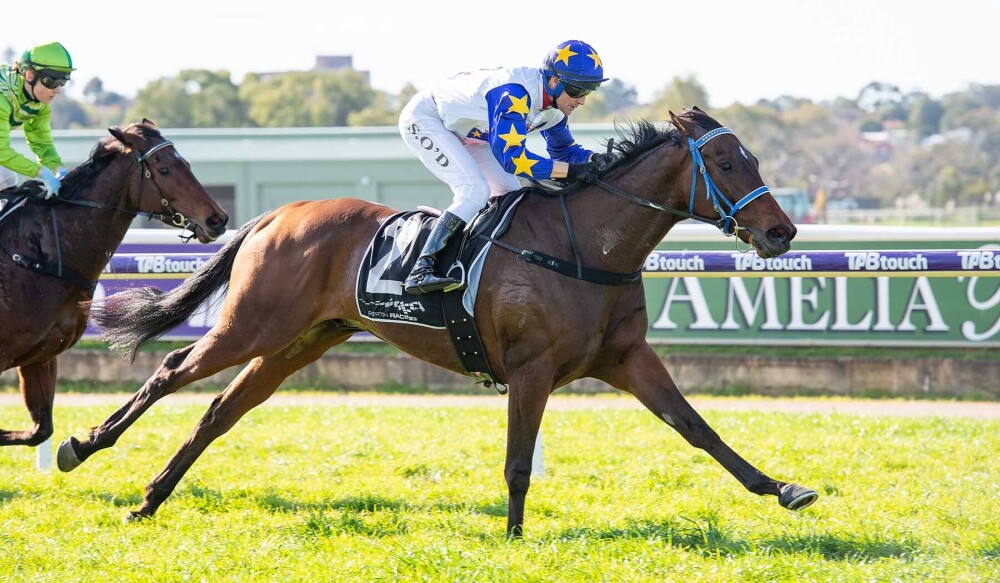 “He pulled up really well after Northam and I decided to go again when the field fell away on Monday,” McCallum said.

“I definitely didn’t think it would take him this long to come good – he’s always shown ability in his work at home.

“It’s been frustrating and I did give the owners an option to move him on.  Fortunately, they wanted to keep going with him, too.

“He’s better in a genuinely-run race and they bowled along today.  It was a sit-and-sprint at Northam and he only just got there but the confidence out of that win also helped.”

Jockey Shaun O’Donnell has a bit of time for Tiger Move.  “It was a tough win at Northam and he had to carry 61kg today.  I didn’t want to go too early so I didn’t pop out until the corner.  He felt like the winner at the furlong and really hit the line.”

Tiger Move was bred by Geisel Park and was initially trained by Dion Luciani before transferring to McCallum in April 2121.  His dam Fictional (Danehill) has an All American 2yo colt named Trick All Treat with Kelstar Thoroughbreds owner Kelly Davis and the mare was covered by Kelstar sire Hi World (High Chaparral) last October.

Geisel Park manager Conor Dunlop has been busy foaling down mares like the Myalup Stud’s homebred American Choice (All American).  She delivered a filly by Maschino on August 20.  It was off her maiden cover after career that included a juvenile win at Ascot and a black-type placing in the LR Supremacy Stakes.

NZ-bred mare Sakamoto (Rip Van Winkle) foaled a filly by Snippetson on August 24.  Her 2yo is a filly by former Geisel Park sire Vert De Grece (Ire).  Named Glotz, she has been retained by Geisel Park owner Eddie Rigg.

Vert De Grece is also the sire of Candlelight Supper who is on a hat-trick at Belmont for breeder and managing part-owner John Chalmers.  Her dam Rare Subject (Red Ransom) foaled last-start Flemington winner Excelleration (Excelebration) before transferring west for $18,000 out of the 2017 Inglis Melbourne Great Southern Sale.