Pearce Racing and Scenic Lodge have combined to win several feature races together in recent years but they were celebrating for different reasons when Galaxy Affair was successful at Belmont on Wednesday. 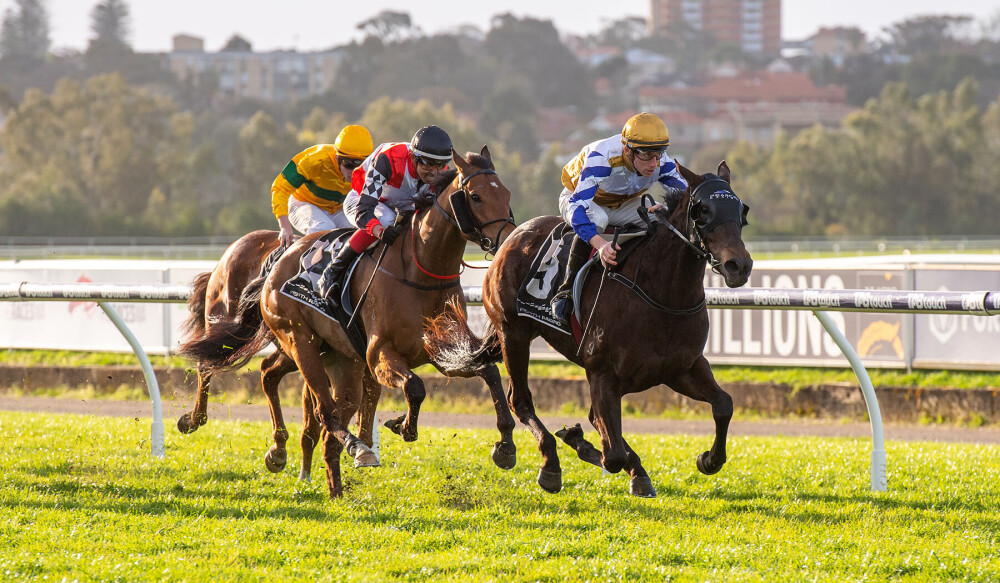 Last seen finishing down the track in the G2 Karrakatta Plate, he sat one-out and one-back before skipping clear for Clint Johnston-Porter.  “We’ve always had an opinion of this horse,” Dan Pearce said.  “He’s come back much sharper and travelled up strongly today.

“We probably went a bit early going for the Karrakatta.  He drew the outside and it was a bit of a disaster.  He will work through the grades and I guess a first-up win like that will bring him into contention for the major 3yo races coming up.”

Galaxy Affair (Photo / Western Racepix) made his way to WA after being sold as a foal by Aquis Farm for $42,500 at the 2020 Inglis June Online Sale.

The Scenic Lodge team were also high-fiving for the second time this week after the win.  General Manager Jeremy Smith had sourced his dam Wild Ava (High Chaparral) for $6,500 at the Inglis 2021 March Online Sale.

“Wild Ava foaled a filly by Universal Ruler on Monday morning and she’s going to Snippetson this year,” Smith reported.  “We purchased her carrying a Santos filly and she will be entered for Perth Magic Millions Yearling Sale next February.”

Wild Ava was a steal being a Doomben winning half-sister to G2 Karrakatta Plate winner Ima Single Man (Gingerbread Man).  They were bred by Yarradale Stud from 2011 Supremacy Stakes winner Single Spice (Not A Single Doubt).

“You can occasionally have a good win in this game and I remember the day we bought Simply Wicked at the 2014 Inglis Easter Broodmare Sale in Sydney,” Smith said.  “I noticed Simply Wicked because she was by Scenic and she only cost $4,000.  Her 2yo filly Delicacy was unknown at that stage but the following season she was named Australian Champion 3YO Filly and WA Horse of the Year!

“It was a real bonus being able to look at that mare in the backyard.”

The Pearce Racing – Scenic Lodge connection goes back to Universal Ruler filly Angelic Ruler who won a LR Sheila Gwynne Classic and LR WA Breeders’ Classic in Perth as well as being placed six times in Group events in Melbourne.

And there have been none more promising than Scenic Lodge-bred graduate Black Fantasy (Blackfriars) who won the LR Aquanita Stakes (2000m) and LR Belmont Classic (2200m) at the tail-end of last season.  “Black Fantasy made that last prep his own after being placed in the (G2) WATC Derby,” Dan Pearce declared.  “He looks a serious horse for this season.”