Ruby Noir – Winner of the Week 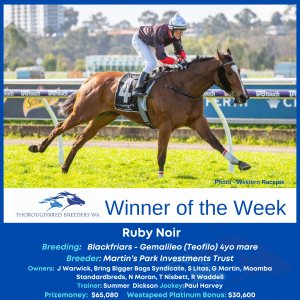 Ruby Noir made amends for a narrow defeat on September 7 when she backed-up for a comprehensive victory in the Salinger Hcp (2000m) at Belmont last Wednesday.

The lightly-raced Blackfriars mare and jockey Paul Harvey made the most of an ideal trail behind front-runner Bring One Home.  Set alight off a quiet tempo approaching the home turn, she saw off a challenge from Kia Ora Jewel (NZ) to let down and score by more than two lengths.

“The seven-day turnaround was a concern until I saw her cartwheeling around the yard this morning,” trainer Summer Dickson said.  “If anything, I thought she might have been a bit too fresh.”

Ruby Noir was transferred from Justin Warwick’s yard last year and won her maiden over 1800m at Pinjarra in January.  “She had shown promise but was given plenty of time to get over a few problems and that’s been a being a blessing in disguise.

“She’s just a half-dozen starts into her career and is only going to get better,” Dickson added.  “Her legs go everywhere but it’s a bonus winning while she’s still learning.  They went very slow in front today and I thought we’re in a bit of trouble if she can’t win.”

Ruby Noir is the first foal from Gemalileo (Teofilo) who was part of the final book covered by Blackfriars at Scenic Lodge in 2017.  The dam is a half-sister to Perth Stakes performer I Am Boudica (War Chant).

Gemalileo is owned by former Touchstone Farm director Glenn Martin and she has an unraced 3yo colt named Yellow Submarine (Merchant Navy), a yearling colt by Shooting To Win and she foaled a filly by Snippetson in August.