Darling View Thoroughbreds stallions completed a 3yo double with Street Parade (Lucky Street) and Baby Paris (Playing God) on Saturday and it won’t be last time they win at Ascot this year.

Street Parade (Photo / Western Racepix) was always travelling in the Amelia Park Hcp (1100m) before going clear for Laqdar Ramoly in the straight.  He had beaten Snowdome on debut last season and was placed in the RL Magic Millions 2YO Classic at Pinjarra and LR Perth Stakes at Ascot. 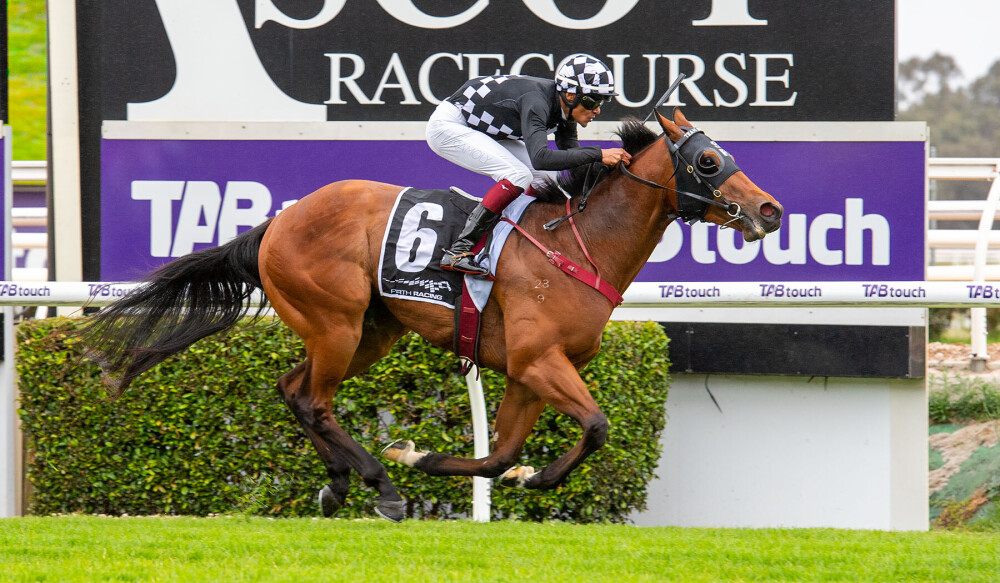 “He was unlucky here a fortnight ago when he sat wide,” trainer Russell Stewart said.  “There was a three-week gap after his first-up run and they got away from him on the corner.  He’s a gross horse and a good doer and he pulled up a bit tubby.

“I also thought he may be getting a bit too comfortable so I put the blinkers on and they sharpened him up working with Swear To God on Tuesday morning.

Swear To God (Playing God) will run in either the LR Fairetha Stakes (1400m) or LR Placid Ark Stakes (1200m) next time out but Stewart hasn’t decided on a path for Street Parade.

“I will talk to the owners and we will map out a program.  I don’t know whether he’s good enough for the big races but he’s honest and you’ve gotta be in it to win it.”

Street Parade was bred by Darling View’s Clive Atwell and cost $40,000 from the Western Breeders Alliance draft at the 2021 Perth Magic Millions.  His dam Foo Foo The Snoo (Starcraft) was an Ascot and Belmont winner and she has a yearling filly by Playing God.

Playing God flyer Baby Paris set up a showdown with All Show (I’m All The Talk) after a brilliant return to racing in the Placid Ark Prelude (1000m) on Saturday.

“She’s got tonnes of ability although I thought she may have been a bit suspect first-up today,” trainer Colin Webster admitted.  “But she just loves racing and does her best every time.”

Baby Paris has only suffered one loss in five starts and that was behind Amelia’s Jewel in the G2 Karrakatta Plate.  She’s a homebred for Kalgoorlie trainer Gary Bowen and is the only foal from War In Paris (War Chant), a Goldfields-winning daughter of LR Ngawyni Stakes winner Paris Moon (Metal Storm).

“War In Paris died shortly after she was born,” Mungrup Stud’s Ann Croucher recalled.  “She was bottle-fed and then fostered on to another mare.  She was so, so friendly and would come to meet you for snuggles and scratches anytime she saw you coming to her paddock.

“We called her Baby Paris and the name stuck when Gary registered her race name!”