Geisel Park filly Laced Up Heels looked a 3yo with a future after overcoming the odds to beat older horses at Ascot on Saturday.

The Toronado (Ire) filly went out a firming market-leader at $2.50 for the Conquer Cystic Fibrosis Hcp (1000m) but favourite punters would have been concerned when she missed the kick and was forced via the cape on the home-turn.

Meanwhile, Lexington City (City Place) was flying in front and looked the winner until Laced Up Heels let down with a finishing sprint that overwhelmed the leader.  “More merit to her because the other one got it easier than I thought he would,” trainer Luke Fernie said.

“The heart-rate certainly got going in the last 50 metres and I wasn’t sure whether she had got the head down!  She’s a nice horse and did a real good job to win.  So did Brad (Parnham).” 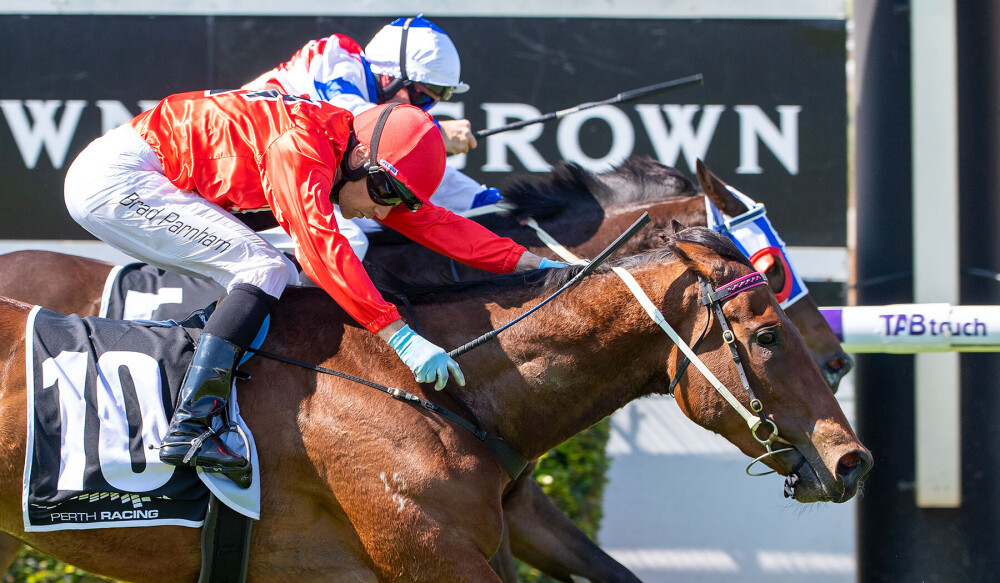 Laced Up Heels (Photo / Western Racepix) had won a Northam maiden at her second start in September and then came from last to get within two lengths of Snowdome (Rommel) in a red-hot renewal of the Perth 3YO Classic (1000m) on October 8.

“She’s normally a placid filly at home but got worked up with the big crowd last week,” Fernie explained.  “We added the ear-muffs today and the quick turnaround probably took the edge off her, too.

“She will only get better and more tractable over 1400m and 1600m.  There are a few options like the Burgess Queen going into the Placid Ark.”

Laced Up Heels was a $100,000 buy for Geisel Park owner Eddie Rigg at the 2021 Inglis Melbourne Premier Yearling Sale.  Her dam A City Girl (Exceed And Excel) has a perfect record at stud with previous winners by Magnus (2) and Fighting Sun.