Hard to believe it’s been more than four years since Trade Fair (GB) died at Alwyn Park especially when his name kept bobbing up with three winners at Ascot on Saturday.

His treble began with Requisition who was bred by Tameeka Brown and is part-owned and trained by her partner Brett Pope.  Victory in the TABtouch-Westspeed Platinum Hcp (1200m) improved his record to 7 wins and $184k in prizemoney.

Buster Bash made it a running double in the Jayde Kinane Hcp (1800m) for part-owner and trainer David Harrison.  Bred at Alwyn Park, he’s won three times and hasn’t been out of a place in five starts this season. 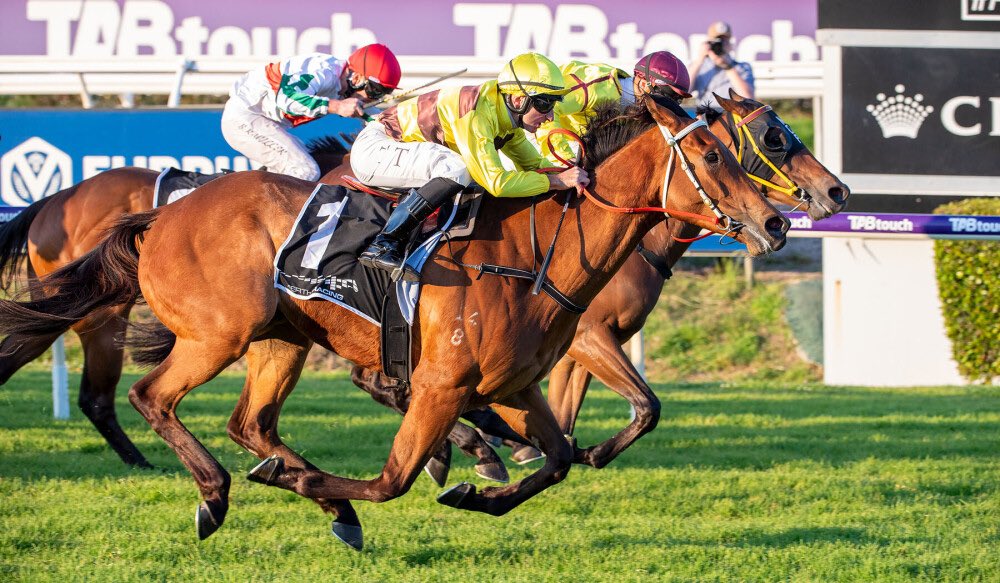 Trix of the Trade (Yellow cap / Photo: Western Racepix) arrived in Trade Fair’s final crop and he filled out the treble in the Quokka Slot Applications Hcp (1400m).  He was racing first-up since failing as an even-money favourite in the G2 WATC Derby (2400m) in April.

Trainer Colin Webster prepares Trix of the Trade for owner-breeders Bill & Patricia Robinson and their Group 1 goal this season is the $1.5million Railway Stakes (1600m) on November 19.

“He was probably due for the paddock instead of going the Derby distance,” Webster recalled.  “He had six starts before the Derby and a couple of them were hard.”

After winning first-up at Ascot in January, he completed a Listed hat-trick in the WA Breeders’ Classic (1400m) at Pinjarra followed by the Challenge Stakes (1500m) and Lex Piper Stakes (1600m) at Ascot.

Trix of the Trade was then runner-up to Rokanori in the LR Roberts Stakes (1800m) and completed his classic prep with a fast-finishing second in the LR Melvista Stakes (2200m) behind subsequent WA Derby winner Alaskan God.

Trix of the Trade shouldered 61kg on Saturday and Webster has the option of continuing his Railway Stakes program in the G3 Asian Beau Stakes (1400m) at Ascot in a fortnight.

Meanwhile, Alwyn Park stallion Maschino was back among the winners last Wednesday when Capricorn Man scored a front-running victory in the Swick Mining Services Hcp (1200m) at Ascot.

Capricorn Man is trained by Sean & Jake Casey for Wally Daly after graduating for $100,000 from the Blackwatch Stud draft to the 2021 Perth Magic Millions.  His dam Corvetto (Dylan Thomas) is a half-sister to Group 1 sprinter Spark Of Life (AJC Galaxy & MVRC Manikato Stakes).