Winner of the Week – Bold Street 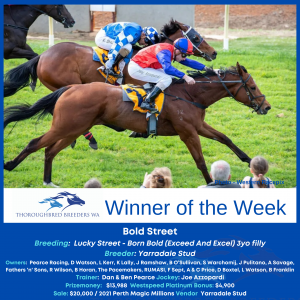 Lucky Street filly Bold Street made her debut a winning one after angling to the outskirts of York racecourse last Thursday.

Set alight by Joe Azzopardi down the hill, she circled the field close to the grandstand rail and then stormed home to nail So In Love (Illustrious Blue) by a nose in the York Volunteers Maiden (1200m).

“She was in a seemingly-impossible position but was able to unleash a brilliant finish down the outside of the track,” Pearce Racing reported.  “It was a top start to her racing career that had been delayed due to respiratory issues.

“She did have five barrier trials across three preparations and it was a pleasantly-surprising win as a $20 outsider.”

Bold Street was purchased for $20,000 from Yarradale Stud at the 2021 Perth Magic Millions.  She’s the final foal from Born Bold (Exceed And Excel) who had been purchased by Yarradale for $110,000 from Darley at the 2007 Inglis Easter yearling sale.

She didn’t salute in a two-start career for Lindsay Park trainer David Hayes but did foal four winners headed by Singapore sprinter Rafaello (Oratorio) who won 10 races at Kranji including the LR Garden City Trophy.

Bold Street’s sire Lucky Street is also a son of Oratorio making her a three-quarter sister to Rafaello.  Yarradale retired Born Bold in October 2021 and Willaview Park pensioned Oratorio in January 2022 after 17 books in the Great Southern.