Winner of the Week – Manavendra 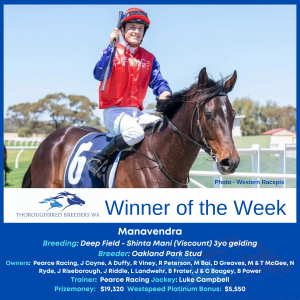 Last week’s racing unearthed several young horses to follow including a trio of up-and-coming maiden winners at the Northam meeting on Thursday.

Village Girl (Universal Ruler) and Demolish (Rich Enuff) were both impressive but Manavendra (Deep Field) was chosen as the latest TBWA Winner of the Week.   The Pearce Racing 3yo got the verdict after another close decision in the Avon Valley.

Manavendra settled two pairs back before driving to the line between Grey Mistress (Sessions) and Banks Avenue (Awesome Rock) in a blanket-finish to the Integrity Maiden Hcp (1100m).  “He has always been held in high regard by our stable,” Pearce Racing reported after the victory.  “There are bigger races for him over more ground in the future.”

Ridden by apprentice Luke Campbell for his second start, Manavendra was a late drifter from $7.50 to $12 after failing on debut at Belmont in July.  He’s first foal from Shinta Mani who was a Listed winner of the 2017 Kalgoorlie Cup for part-owner and breeder Neil Randall.

Sharon Miller trained Shinta Mani and she also prepared her dam Bonzara Gold (Ron Bon) to win a Bunbury Maiden (1400m) back in 2001.

Oakland Park owns Shinta Mani and they have her 2yo filly Manhattan Jewel (Manhattan Rain) with Pearce Racing.  Her new-season filly foal is by Godolphin’s English Group 1-winning sprinter Too Darn Hot (Dubawi).

Brothers Dan & Ben Pearce lead the WA trainers table this season thanks to their 3yo team that accounts for 12 of their 24 wins.  They include Bold Street (Lucky Street), Galaxy Affair (Merchant Navy), Queen Alina (Mahuta), Sofia’s Symphony (Smart Missile), Cosmopolitan Girl (Safeguard), Does He Know (Demerit) and Exceltrain (Spirit Of Boom).